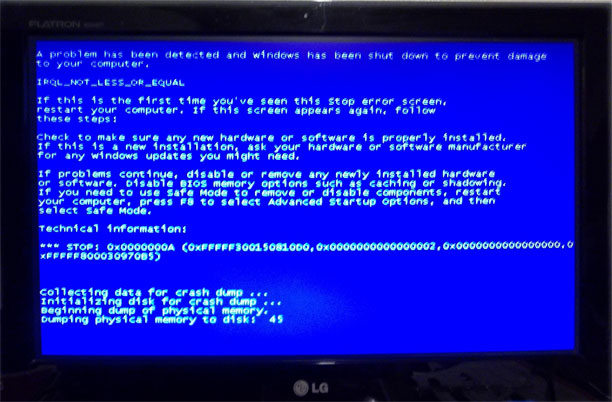 I recently purchased a new XPS 8700, to replace the Dell Inspiron I purchased in 2010. I wasn’t thrilled to be replacing my system after only four years, when my previous one had lasted almost seven years. Plunking down a thousand dollars isn’t something I can do easily, but since I do need a computer to earn a living, and my old Inspiron was showing the early signs of a failing hard drive, I sucked it up and bought my third Dell.

My third Dell will also be my last Dell. And here’s why:

My new system—and I use the word new very loosely here—arrived with an out of date BIOS, out of date chipset drivers, and 19 out of date system drivers. It worked when I plugged it in, but the moment I started loading software, like Firefox and Chrome, the problems started. In the six days I’ve had the system, I’ve seen nine Blue Screens of Death, with IRQL Not Less or Equal errors. These errors are apparently so common on Dell systems that your online support has them listed as a tech support email category. That is a sad statement on the quality of the goods you ship.

I’m a pretty fearless girl when it comes to my computer, because I spend so much time working on it. I’m not afraid of the occasional error message. This? This was a train wreck. I spent a three day weekend running diagnostics, and hunting down the correct drivers for my hardware—something I should be able to do on your site, but, because your diagnostic tools are so generic, could not. Your support site told me I needed to update four video drivers—three of which weren’t for my operating system. It told me to update drivers to versions that are actually older then the ones I’ve already installed. It told me I was experiencing Blue Screen errors, and gave me a long list of things to do about them. None of them has actually fixed the problem.

I purchased a third-party driver updater, to scan my system, and help me decipher what I really needed from your generic driver list. I downloaded a registry cleaner, to remove bogus entries that were causing error messages. I opened the error logs, and tracked down the causes of hundreds of errors and warnings listed there, and then applied the fixes.

I did all these things while waiting for your tech support folks to answer their emails. I sent in my first error report on Friday morning, and another on Saturday evening. It’s now Tuesday night, and my problem still hasn’t been resolved—partly because support is only open from 9-5 Monday through Friday, and partly because, by the look of the flood of comments on your Facebook page, you rarely bother to help resolve tech issues on your systems. I can see that in the email I received just before five today. The support person wrote that if I’d made any recent changes to my computer, and couldn’t replicate the error in Safe Mode, it was probably due to third-party software, and not something they could diagnose.

Translation: we have your money, and we don’t care if your computer actually works in a real world situation.

And so, Dell, we must sadly part ways. I will never purchase anything with the Dell logo on it again, because I now know that you have no intention of sending me anything that really works out of the box. I will get this system running, without your non-existent tech support, or I will raise holy hell and return it.

Either way, we’re through.