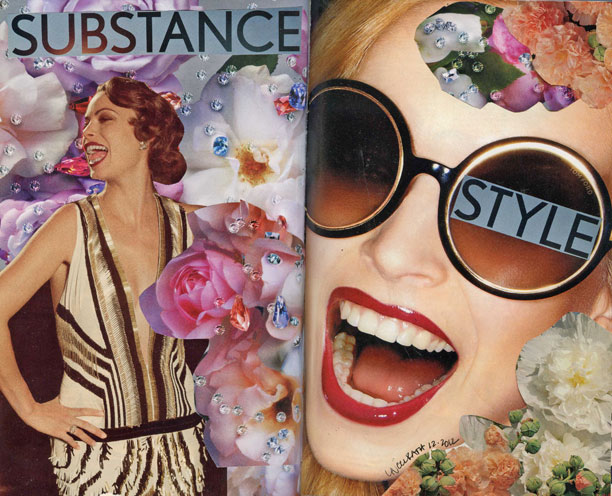 Today’s artwork is a set of gluebook pages. I always forget how relaxing gluebooking is. Why don’t I do it every day? I went through a phase where I would do daily gluebook pages for an entire month, and then bind them together. I should do that again…

This week, I made the very grown up move of transferring my newsletter list off Yahoo Groups, to a real email marketing service. I’ve been using Yahoo Groups since 2004, when I moved a subscriber list of about 700 from my gig at Bella Online. 250 or so people followed me, and I’d been writing for Bella for maybe two or three years. This time, I moved a list of 4,500 that had existed for eight years.

One of the things I opted to do while moving my list was require people to go sign up for it again, rather than exporting the list of email addresses from Yahoo, and uploading it to my new service. I did that so that I could weed out the old, dead, or bouncing addresses, and the people who are no longer opening emails from me. I also opted to collect first and last names of the people signing up, in addition to email addresses.

Something weird happened. A small percentage of people refused to give their names.

Now, maybe it’s just me, but I think it’s kinda strange to sign up to receive emails from someone, and refuse to tell them who you are. At first, I was just annoyed, but the more I thought about it, the more uncomfortable I felt. Why on earth would I agree to send an email message to someone who won’t tell me who they are? So, after letting it sit for a while, I started deleting any entries that did not contain a complete first and last name. If you know my name, I think it’s only polite to tell me yours before asking me to email you every week. Nothing personal to those who are shy, or choose to hide behind screen names, but I’m drawing a line in the sand over this.

While we’re on the subject of emails, the last email I received in 2012 was from Joanne (kit@yahoo.com), which may or may not be her real name or email address, since it was sent through a contact form:

“Your work stinks. I’m not sure how you got your name around but you are an evil bitch and your work is empty..no soul..nothing to speak of. I think its time you got over yourself.”