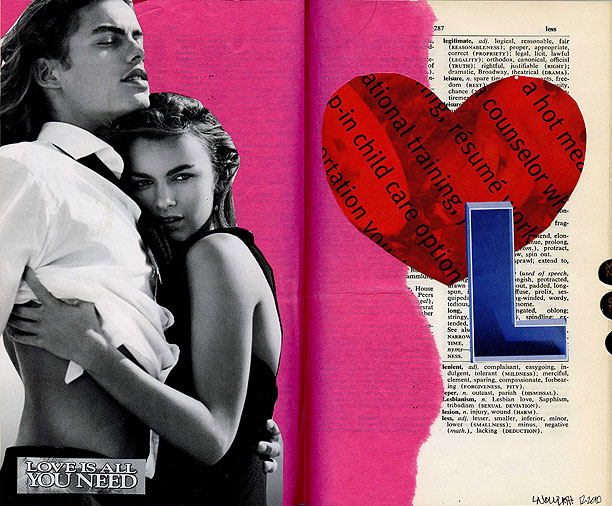 This was a long week.

The last week of any month is long for me, because I usually spend at least three days of it getting the next issue of The Monthly Muse together. That’s usually three days of really focused work on making things, writing instructions, doing the ‘zine layout, and getting the files uploaded in their appropriate places. On the fourth day (today), I usually loaf around the house, watching DVDs, because I’m too tired to do much else.

In addition to juggling the usual end of month stuff, I made a terrible decision last week: I quit my latest round robin project. I’ve done 30 altered book round robins, but this is the first one I’ve walked away from mid-stream. I was the second of two people in my group who left the project after the December mailing, so I thought long and hard before I contributed to creating that kind of hole. Although I really liked the work I’ve done in the books I received, I was sad that I couldn’t do more in them, and disappointed each time I received a new book—because the artist who mailed to me was using solvent-based products that made me feel sick.

Now, I’m not against solvent-based products in general. I have my share of spray cans living out in the garage, which is where I usually use them. I keep the garage door open, use a mask if I have to, and let the items air out before bringing them in the house. I try not to use them in items that will be passed to another artist soon after their creation, because I know I’m not alone in my sensitivity to these products.

Receiving a box once a month that required me to air the book within in my garage for a week before examining it was not a happy thing. You’d think that a discussion of this issue amongst the group would resolve the issue, but sadly, it didn’t. I was stuck receiving books that smelled bad, and also losing a week of my working time, which meant not doing as much as I would have liked. It made me very sad. Collaborative projects should be fun, not unhappy. So, I quit. Not my happiest moment, but as soon as I hit the send button on my email to the host, I felt as though a weight had been lifted from my shoulders.

I’m one of those people who believes we’re supposed to learn something from every experience, positive or negative. I think I learned two things from this:

1. There’s nothing I can do to make someone care about something. Talking, begging, explaining at length, pleading, yelling—none of those things is going to turn someone who genuinely doesn’t give a damn into someone who does. That’s going to be a tough lesson for me to accept. My mother used to tell me I have an overdeveloped sense of justice. Chalk it up to being a Libra, and needing things to be fair and balanced. I should just quit expecting other people to want things to be fair. Most people only want fairness if an issue is resolved in their favor—otherwise, forget it.

2. I should quit doing collaborative projects with people I don’t already know. That’s an equally tough lesson, because in the past I’ve taken great joy in doing round robins with complete strangers. When I compare this project with the two round robins I did this year with my design team, or with those I’ve done with my local mixed-media group, I find it lacking—not because it was a bad project, but because somewhere in all those projects with people I know, round robins became more personal. I like that connection of friends. I like that we all know each other, and talk to each other for years on end, and then, oh, yes, let’s do a round robin. I’ve changed. I shouldn’t inflict that expectation of personal work on strangers.