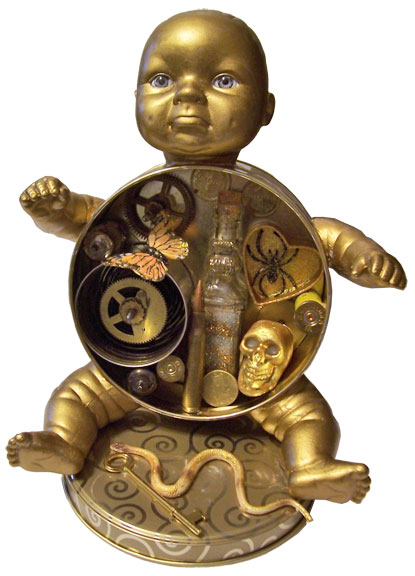 OK, so I’m going to ease my way into this weekly thing with a piece that has been sitting on my workroom shelves for a few weeks. I’ve finally decided that it’s finished, and it seems appropriate for the first piece of the new year. In fact, I’ve christened him Baby New Year.

This one started as a how-to for a recent issue of The Monthly Muse, and sort of sat around empty for a while. I began collecting random items to put inside, with the only real unifying aspect being that they were mostly gold. This sort of piece makes me open all the plastic tubs of junk in my workroom and peek inside, which is probably a good thing, because I forget what I have laying around.

My favorite part of this piece is the round section on the left of the interior, which is a tin can filled with a gear on a clock spring. The spring holds the gear in place so it floats in the can, and whenever the piece is touched, it bounces. It’s pretty nifty.

That’s it for this week. You’ll notice that this site won’t allow you to comment any more—I found that I carried the one or two meanies with me more often than I heard the tidal wave of good words, so I decided for the sake of my bliss I would just shut the commenting off permanently. More on my issues with commenting can be found in this editorial.