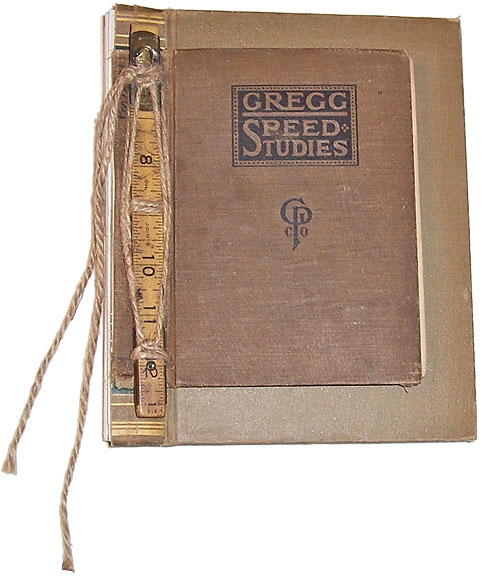 When I first started doing altered books back in 2002, I dove right into round robins. At that time, the big altered books group on Yahoo only had about 2,000 members, and it was relatively safe to organize projects there. From 2002 through 2004, I did about two dozen different projects, and alhtough they became progressively more difficult to organize, I was pretty happy, because they always turned out well—until the last one, which turned out so badly that I packed up my toys, and swore I wouldn’t do another round robin by mail.

Since then, I’ve done mostly local projects, either with people at work (back when I actually went to work rather than rolling out of my bed and stumbling across the hall to my computer), or with my local mixed-media group.

One day last fall, I was whining to Livia, the one member of my design team at Ten Two Studios who lives in my area, about the lack of really good altered book round robin opportunities in the coming year. She suggested I try to get one going in the design team group, where I discovered that five of us were game for a monthly passing of the books. The first mailing is this coming week.

My book for this is one of those completely torn apart, then rebuilt things that I’ve been making for a while now. I used two books—a large Portugese dictionary, and a smaller Gregg’s Speed Writing. They were both similar in color, and layered nicely. I filled the smaller front book with a few blank pages, to hold rules, my contact info, and an area for the other artists to sign in. The larger book behind holds all sorts of old papers, plus a fake niche filled with photos. I decided to call the book Endangered Occupations, and before Tuesday, I’ll be adding artwork that’s about things that people used to do for a living that either don’t exist any longer, or are now relegated to hobbies and pastimes.

More to come. You can follow the progress of this project, and see the work I’ve done so far here.