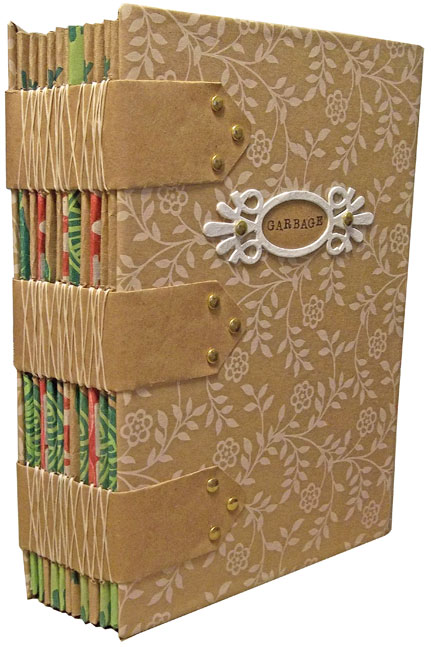 Today’s artwork is a book made from a stack of Whole Foods shopping bags and cardboard, and a little brown paper and linen thread. I agreed to pass journals back and forth with the lovely Amy McDonald, and this is the book I’m sending.

So, this book took me a few days to assemble, mostly because I wasn’t entirely sure how I wanted to bind it. When I finally got all the pages sewn together, I set it aside for a day, because then I wasn’t sure how I wanted to cover it. In between, I snapped a photo of it, and posted it to my Facebook page.

I don’t post a lot of work in progress photos, because a lot of what I do doesn’t really look like anything until the very last minute. But every once in a while, I stop in the middle, and whatever I’m working on does look like something, so I take a picture and post it on Facebook.

And then, people I’ve never heard of before ask me to tell them how to make it.

I sort of wrote about this last month at Ten Two Studios, because during the month of December, I was running daily eye candy posts, and people kept leaving comments asking for instructions. And when I say asking, I mean they were leaving “Where’s the how-to?”, or just “Instructions?”, as if I actually write free instructions for every project the design team sends in. Or maybe they were hoping that, even though I’ve never heard of them before—meaning they’ve never bought anything from me, or participated in any project I’ve hosted—I’d just drop everything and write them. Either way, it’s just plain rude. And annoying.

When those same comments, from people I’ve never heard of, start appearing about a piece of personal artwork, it REALLY annoys me. And it makes me not want to post any work in progress photos. Or photos of finished things. Because I don’t like knowing that I’m being followed by people whose only response to my work is “Gimme the instructions.” instead of “Hey, that’s cool.” or “Thanks for sharing.”

So, here’s the deal, in slightly less polite language than I used at Ten Two Studios:

Not everything I know how to do is available as a free how-to lesson. Or even a paid how-to lesson. If I wanted to share instructions, I would shoot the step-by-step photos as I work, and when I posted photos of the work in progress, I would mention that instructions are coming. If I don’t indicate there are instructions coming, asking for them isn’t going to make them appear. I can’t pull them out of thin air, after a piece is finished. Very often, I can’t even put into words how I make my personal artwork. It’s not stuff that can be related in simple, easy steps.