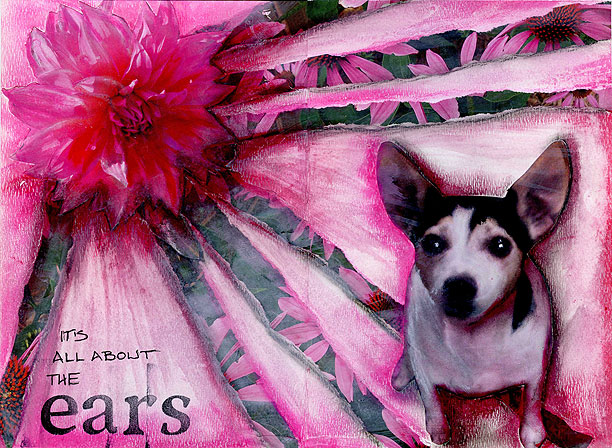 It was week two of the first journaling class on the Strathmore web site, and without warning, the second lesson built on the first. So, if you didn’t follow the first lesson’s instructions completely, it was hard to move on to the second lesson without starting over again. Not that I know anyone who doesn’t follow directions *ahem*.

I started with new backgrounds, trying to follow the first week’s instructions more closely, and then moving on to the second week’s lesson, which added color with oil pastels, shading with charcoal pencil, and a wash of gesso. There was some other stuff, about journaling with a pencil, before the gesso—I skipped that part, because I was having too much fun with colors. I also blotted away a lot of the gesso, because it was just like this weird haze over my very colorful photos and more colorful oil pastels.

And yes, once again, I went off in my own direction rather than following the instructions, because I figure I’ll end up with a whole bunch of finished pages that let me play my own way, rather than one finished page that’s exactly what the teacher told us to do. See? I told you I’m a bad student…

I decided it’s OK for me to continue disliking my own writing, and using letter stamps for some of my message. I’m probably not going to be one of those art journalists who fills a page with lovely writing, although I’m still practicing my lettering while I watch television. I wrote and stamped my thoughts about my dog Weevil—and when I was done, I realized I liked my finished page. Like, it really looked like an art journal page. Wow. 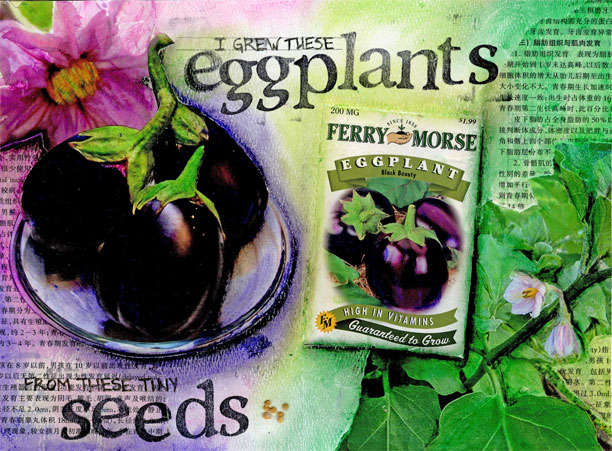 Just in case it was a fluke, I did another one—and this time, I really ignored the instructions. I skipped the lines for writing, the gesso, the under journaling, and just used my photos, charcoal and oil pastels. I did some work using this same idea in Patti’s teeny tiny journal last year. This one is a 9×12 sheet of watercolor paper, which is still sort of on the small side for me.

I ran into a few problems, like killing off one of my pens writing over oil pastels (and discovered the solution is Copic markers, which I now have), but overall, this was a fun week in art journal land.

And I bought a pad of 11×15 paper this week, which might be a better size for my next project: I want to try to journal about my garden this year. Hmm. Maybe this art journaling thing is finally going to stick…