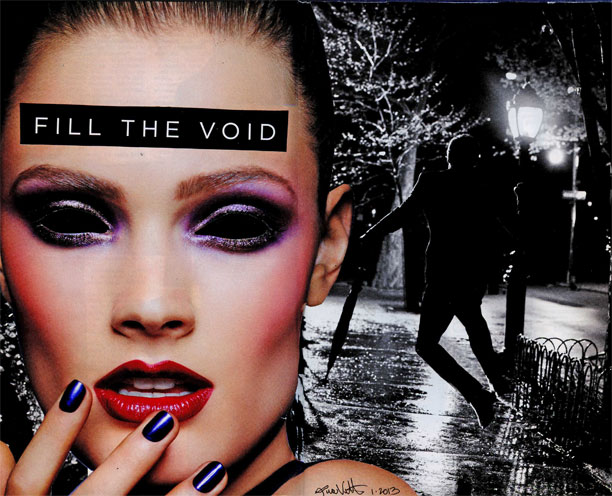 Today’s artwork: another set of gluebook pages. I didn’t really do these this week, because there was a serious lack of art going on here. I wish I had a good reason for that. I don’t.

Yesterday, I left the house. To meet people and interact with them. I mention this because it’s my nature to be social. I feel most comfortable at home, alone, with the phone off. I like being alone. And sometimes, I forget to go out into the world and be with others for days or weeks on end. It’s a problem, because the world is not designed for people like me. We’re all supposed to form relationships, and family units, and create a social structure for our lives. I have none of that, and I find it confusing when I’m expected to have it. I fly solo, and probably always will.

So. Going out to meet up with my local vegan buddies is notable, simply for the fact that I did something that involved having an actual conversation with other humans. Also, large amounts of Lebanese food, some of which might not have actually been vegan, but since these friends are not stereotypical “meat is murder” vegans, that wasn’t really a big deal. I love meeting up with these folks, because there’s always lots of food, and nobody takes themselves too seriously, so there’s lots of laughter.

We’re having a couple warm, early spring days this week, before crashing back winter cold, so I spent a little time cleaning in the garden. It will be time to start planting things in about a week, and I want to rework the vegetable garden to take advantage of the area that gets the most direct sunlight in the spring and fall. The trees along my back fence line have grown so large that when the sun is at a lower angle, half the garden is in shade for more hours that is optimal, so it’s time to shift things a bit. And maybe expand while I’m at it, to make paths narrower, and arrange beds to cover more of the sunniest ground.

My goals this past week included starting the videos for a new online class—and somehow, that didn’t happen. I’m having trouble getting going on this one, even though I love the topic, because it’s either too cold outside to film things like spray painting and burning the finish off metal with a torch, or too pretty to even consider working. Maybe I’ll have better luck this week…