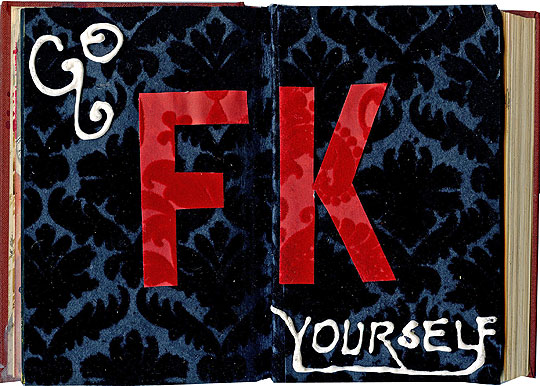 This week, I worked in Livia’s altered book, a tiny little thing that used to be a Roberts Rules of Order. She’s renamed it No Rules of Order, and the general theme of the book is breaking rules, disorder and disobedience.

I knew I would have trouble with this book the first time I saw Liv tearing pages from it. It’s small, which is not my strong suit. I like to work big. While disorder and disobedience are close to my heart, this book about breaking rules has one that’s inhibiting for me: no cursing. How the *&%$ do I get around that one? Well, this is one way: I did a layout that folds out, which appears to be my favorite four letter word—but, as you’ll see when you click through and view the expanded version, it’s something else entirely.