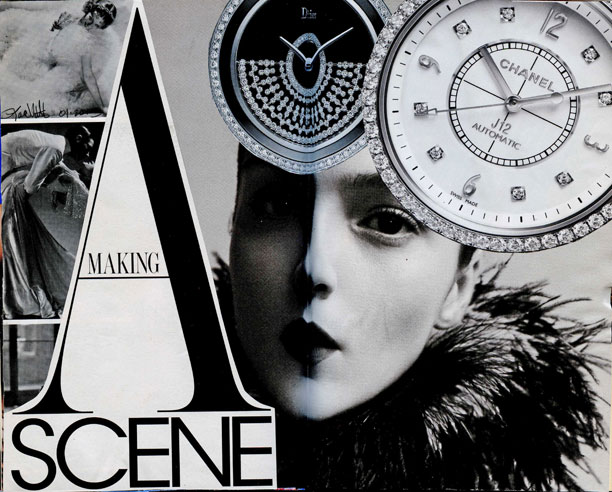 Today’s artwork: a gluebook page from a few weeks back. I’ve been slowly scanning and posting the work I’ve been doing in my thesaurus gluebook here. I’ve been working in this book, off and on, since 2005.

The bad news from this week: I spent Thursday night and most of the day Friday in the hospital. First, I went to the ER. Again. Then, I was admitted, because the ER doc decided my hemoglobin level was so low, I needed a transfusion. I spent the wee hours of Friday morning being hovered over by nurses watching for any sign of a reaction to the two units of blood they put into me. Apparently, there are 99 different ways to respond badly to a transfusion, including a list of eight that were on the form they made me sign. #1 was fever. #8 was death. Don’t ask me what the other six were, because I was two pints low when I signed the form, and didn’t really care about anything at that point except not passing out.

The good news: since I was admitted, I got to see a doctor who could do more than just patch me up and kick me out, which is really what the ER docs want to do. I told her my story, and she looked at all my tests from both ER visits, and was not happy that I still didn’t have a doctor or a plan, or any hope of getting either. She’s my doctor now, and she’s determined to extract my angry uterus, and help me find a way to subsidize some of the costs of the surgery through some programs at the hospital. I left the hospital feeling exhausted, but hopeful. I have a follow up appointment with her this week.

The really bad news: I now have not one, but two sets of hospital bills to pay—and then, whatever the surgery will cost. My budget has a little give to it, but not enough to absorb three visits to the hospital in one year, all out of my tiny pocket. To give you an idea of what this is costing, here are the bills I’ve received so far for my first ER visit in December:

I’ve been calling each time a bill comes in, to get an itemized listing, and then calling again when that arrives, to ask for an adjustment, because people with insurance get a better price for services negotiated by their insurance companies, while people like me, without insurance, are billed outrageous, inflated prices for the same services. (To give you an idea of how this plays out: to see my last doctor with insurance was $10 out of pocket from me, and $90 from my insurance company. Without insurance, the same visit was $250 cash, which is the price she had to set to survive the prices set by the insurance companies. It’s a stupid system.) Anyway, sometimes, if I chat up the person on the other end of the second phone call, I can get that better rate applied to my account, which is awesome, but the totals are still well outside my reach—and there’s another stack of these bills coming soon for this week’s ER visit, that will include seeing at least two more doctors, having four more rounds of blood tests, a transfusion, and who knows what else.

And, of course, while all these bills are raining down, I’m not working at full speed. The new online classes I thought I could have ready by the end of January haven’t even been started yet. My income has really taken a big dive while I’ve been dealing with these health issues.

So. I could use a little help, if you can spare it. I’m posting this for donations, and for some arty friends who have offered to donate pieces of work to help raise money. (I’m hoping to post more on that shortly.) If you have some spare bucks, help a sister with a broken uterus out:

You can also help by buying stuff at Ten Two Studios. Even while I’m laid up, the digital product system delivers your download links for me at lightening speed. Or you could buy something from my Etsy shop.

And now, back to bed…