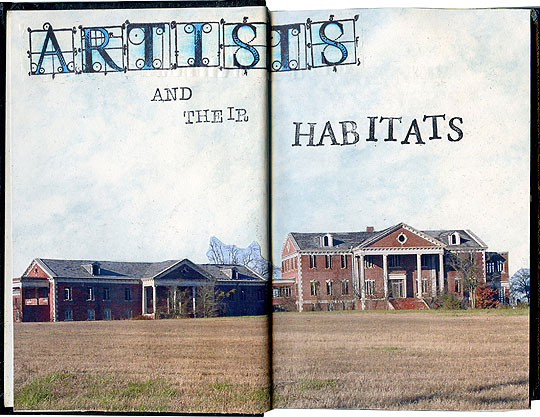 Those of you who are long-time followers have probably caught on to my need for order amongst the chaos. When it comes to organizing projects, I’m kind of a pain in the hind parts….

This month, the Gods of Order decided to mess with my little design team round robin project. Patti mailed her book from Michigan, to Peace in Colorado—and the book promptly went into post office limbo. There was a scan of the tracking number at a sorting facility in Michigan on February 12th, the day of the mailing. Then, nothing.

We waited for two weeks, and finally, surrendered to the idea that the book just wasn’t going to surface. This was a particularly tough one for all of us, because part of the point of this project was that we all know each other really well, and had assumed that our books would be passed promptly from one to the other with no hassles, delays or losses. Poor Patti was heartbroken, and just didn’t have it in her to start a second book and send it out to possibly meet a similar fate. What do do?

I emailed Patti, and offered to start a second book for her, and I could hear the sigh of relief here in Texas when she replied. On Sunday night, I grabbed one of the bazillion books I had on my waiting-to-be-altered shelf, tore out alternate pages, and whipped together a title layout, sign-in page, and a sort of free form rules page based on stuff Patti had written about her theme. The book went out to Peace on Monday, and arrived mid-week. (Ongoing pics of this round robin project can be seen here. New pics are being added at the bottom of the page.)

On Tuesday, I went to a new gallery with Livia, and while we were driving, I told her I thought that as soon as I mailed the new book, Patti’s original one would surface. Sure enough, the day the new book arrived at Peace’s house, I saw there was a scan on the original book’s tracking number—at a sorting facility in New Jersey. I’m not sure how it got there, but clearly, the book was not completely lost yet.

This morning, I checked again, and there’s a scan on the original tracking number from a sorting facility in Denver. Could the original book show up at Peace’s house in Colorado this week? We’ll see…