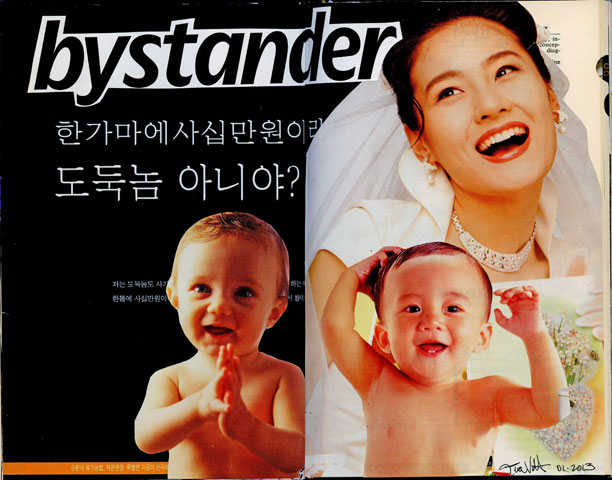 Another gluebook page. Probably the last one for a little while, since I have other projects that need attention.

So, last week, I asked for help with my looming medical bill disaster, which was hard for me. I’m a very independent, go it alone, do it yourself kinda girl. Asking for help with something is not in my nature, even when I really need it. But ask, I did, spurred on by some arty friends who wanted to donate the proceeds from the sale of their artwork to help out. They reminded me that it’s OK to ask for help if you really need it—and also, that whether you ask or not, sometimes it’s just going to appear, so I should just get over it.

In the past, I’ve been on the giving end of more fund raising efforts than I can even remember. I’ve always felt a little guilty for not being able to give abundantly when people need help, but that’s one of the minuses of doing what I do: not much expendable cash. I traded that away, along with my subsidized health insurance and 401K, and there’s not much hope that I’ll ever see it again. I do what I love, but it means having to mind my pennies.

Being on the receiving end of a fund raiser is new for me, and it’s been a learning experience. I assumed I’d post the Chip In, and a few friends would kick in a few dollars, and that would be the end of it. Instead, I learned about how it feels to be supported, both by generosity, and by love.

One thing that struck me this week: a dear friend, also an artist, donated money—and then emailed to apologize that she couldn’t send more. She’s sort of in the same financial boat I am: supporting herself with her art, during a hard economic time. Except she also has a family to keep afloat. We had a rather tearful exchange via email, with her expressing regret that her contribution didn’t represent her feelings towards me, and me telling her I know exactly how she feels, because I’m often the one who can only offer five or ten dollars when someone I care about is in need, and those dollars never really seem to match the support that’s in my heart. Putting that into writing, and sending it to my friend sort of set us both free from feeling badly that what’s in our pockets doesn’t match what’s in our hearts.

I sent out a thank you email, to everyone who had donated by Thursday morning, when I also switched from ChipIn to a regular PayPal button, because ChipIn’s site kept going down. And I can’t tell you how many people responded with an apology that they couldn’t give more. I kept thinking, don’t these people realize how much they’ve given me?

So, now I know never to feel badly again that all I have is five dollars to give. Because all those folks who pitch in five and ten dollars lifted my spirits just as much as those who pitched in more. Each time an email came in, I felt a little lighter, whether it represented a large amount or a small one. And yes, there were large gifts, which I appreciated—but they didn’t make me think less of the small ones. They all represented help at a time when I really, really need it, and I’m so thankful.

The really good news: between donations and a little bit from my savings, I’ve paid off all the bills from my first trip to the ER in December. Or at least all the bills that have arrived from that trip. I’m hoping there aren’t any more.

The not so good news: I have an even bigger set of bills on the way from last week’s ER visit, and no idea how I’m going to cover them. And a $6,000 outpatient procedure next week, to be sure there isn’t any of the C word lurking anywhere. And then surgery in the very near future, with a six-week recovery period, because this problem is too large to be dealt with using minimally invasive methods. I’m going to get the full slice, old style. I can’t even imagine what the bill will be for that.

Thanks for being out there. Think good thoughts for me…