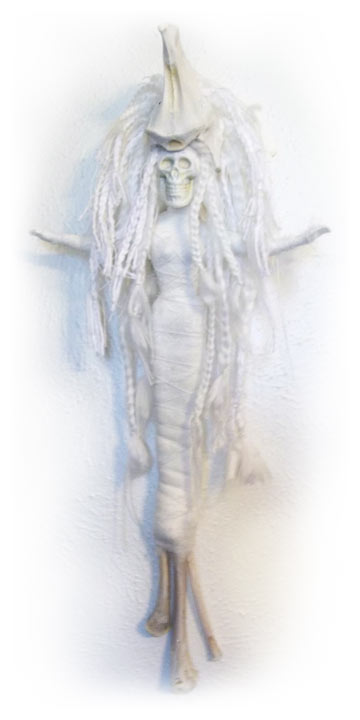 This is my latest art doll, for a swap on FreakWerx. Barbie doll base, wrapped in cheesecloth and twine, decorated with bones and corn silk braids. I decided this morning her name is White Death, which describes her, and also how I feel right now.

So, last Monday, I woke up with what I thought was just the early onset of the usual spring allergy stuff. About halfway through the day, I realized that no, it’s not allergies—I’m coming down with something. By Tuesday, I’d decided that it was the full-on plague. Sneezing, coughing, aliens from another planet taking up residence in my lungs, more coughing, and at one point, coughing so hard I started puking, which I seriously don’t recommend. Ever. Also, sometime late Tuesday, fever.

Repeat every day for a week, and you’ll understand why I feel like white death today. Since I run a fever pretty much at the same time every day, I’m going to assume this is viral, which means there are no drugs to get me through it faster. I just have to ride it out. This is the first time in quite a while that I’ve been this sick for this long. I can usually shake it off in a day or two. I can honestly say that right now, I think I’ll be down with this until the end of the week.

Needless to say, I did not make this art doll last week. She was hanging behind my workroom door, finished, by the time the first cough occurred. What wasn’t finished was the March issue of The Monthly Muse, which I always upload on the 1st of the month. I finally uploaded it this morning, five days late. I hate being late. I will go out of my way to avoid it. I read an article once that said that people who are always late subconsciously think that their time is more valuable that everyone else’s—then, it REALLY became a pet peeve. Must not be late. No, no, no.

I caved, and sent out an email saying I’d be done today. And I was, even though I’m still hacking up alien life forms.

Obviously, all other art making is at a standstill at the moment. I mailed off my dark circle journal on Monday, but the next book has not been mailed to me yet, so there’s a lull. I just signed up for a hand carved stamp swap, but it’s not due until the end of the month. I’m working on an enormous journal, but haven’t managed to finish any pages in it yet.

All things come to a grinding halt when I’m sick.