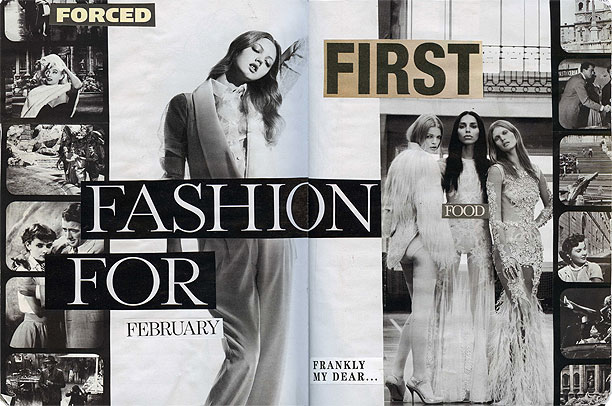 Another week, another gluebook page. I’m determined to make some progress with my black and white gluebook. It’s been living on the corner of my coffee table, taunting me, along with all my other unfinished objects, or UFOs, as they are lovingly called in many creative circles. I have a ton of them, because I am The Queen of Starting, But Not Finishing.

So, I spent a good part of this week clearing up assorted UFOs. I’ve had a pile of toilet roll books (stop snickering, they’re a real thing—see the December 2010 issue of The Monthly Muse for instructions) trimmed and ready to cover for weeks now. I finally finished them up, and thought I’d make them into little kits, but that seemed to be taking way too much time, so I tossed them into some sample boxes that I put up for auction this morning. I do this periodically, because I make a ton of sample pieces for Ten Two Studios stuff, and I never really have any homes for them. Rather than toss them, or do something with them (I’m not sure what), every few months, I sweep through the whole house, gather all the little darlings up, sort them into piles, and list them on eBay as sample boxes. I don’t really make a ton of money from them, but I do send them off to good homes, to people who want them, instead of letting them hang around here and get on my nerves.

I also started working on some new kits, which I’ve been putting off for a while. I made myself sit down and list all the kit ideas I’ve been contemplating, put them into a monthly spreadsheet, and am slowly working my way through them. Some are ideas I had that made it into The Monthly Muse, but never moved over to actual kits. Some are kits for which I’ve shopped for supplies, but either haven’t completed, or haven’t packed. Some need images, and other need instructions. Slowly but surely, I’m turning them into one or two new kits every month. Somehow, I’m still pulling bags and boxes out, staring down into them, and asking the dog what the heck they are. He’s clueless.

This week was also the kick off for the second of the free Strathmore Visual Journal classes. Unfortunately, the first lesson was all stuff that I’ve done repeatedly already in altered books, so I didn’t do them again in my journal. I did post an example or two to the class discussion board of how I used those same techniques in an altered book, so I did participate, even if I didn’t do any new work. I’m hoping next week will be something I’ve never tried, and I’ll get back to playing with art journals for a few weeks.