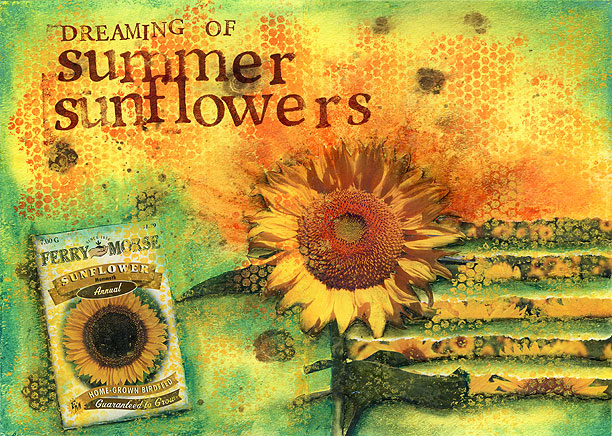 I’m sure, by now, you’re tired of hearing me complain about the weather, so I’ll make it brief: yesterday, it was almost 80 degrees, and I had all the windows open. Tonight, it’s supposed to get close to freezing again. This winter/spring/winter/spring weather pattern is a lot like watching a ping pong game. Here I sit, nose pressed against the glass of the dining room window, staring out at the garden, and wishing I could plant the dozens of seedlings covering my dining table.

A couple of weeks back, I found an old package of Mammoth Sunflower seeds. Even though they’re dated 2009, I decided to throw some into peat pots, and see if I could get them going. I’m pretty sure I got these shortly after buying an armload of sunflowers as big as dinner plates at Central Market, because I remember photographing them, and thinking I should try growing some of my own. These are way bigger than the flowers I bought—they’re the one big stalk with one ginormous flower with a massive number of seeds in the center kind of sunflowers. Go big or go home, right?

Anyway, those seeds were a bust the first time around, but since I’m inside twiddling my thumbs anyway, I tried a second time. I’m not sure if it was the moisture or the amount of sunlight and heat, but the second round of seeds took, and six of the eight pots started to sprout.

Now, most seeds sprout in kind of a dainty way. They’re small and fragile, and need a gentle hand for a while. Not these. They stuck their heads out of the soil fully formed. They’re huge. They immediately outgrew the pots I’d put them in, and the greenhouse trays I’m using. They’re ridiculous. I can hear them growing when I walk by.

So, there you have the inspiration for this week’s journal page. I can picture their enormous heads towering over the south end of the vegetable garden already…