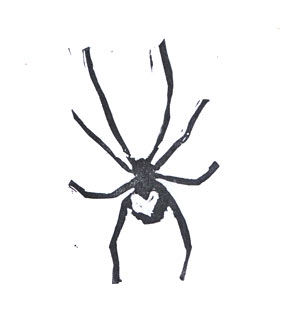 I belong to two small, offbeat art groups on Facebook: the dark circle journal group, and FreakWerx, which has reformed at various times on LiveJournal, Yahoo Groups and Flickr. We’ve been doing small, weird swaps there. This week, I sent out this carved stamp of a spider with a heart on its back. Next month, I’m sending off a stuffed animal made from pieces and parts of several other stuffed animals, Frankenstitched together to form what at the moment looks to be a duck body with long legs, topped by a rabbit head, arms and ears. With wings. And a beak.

This kind of small, weird work appeals to the artist side of me, rather than the side that produces products. My current problem is that my artist side is veering very far away from the products I produce. I’m toying with ways to start producing products that are more in line with what I’m doing now, while not completely alienating the customers who keep me in business. It’s a problem, and one I’ve been discussing with the women in the circle journal group, some of whom are also experiencing a disconnection from what they do for a living vs. what they do to satisfy themselves as artists.

I had a conversation with someone recently, where I expressed the thought that my best business happens leading up to Halloween. Not because Halloween is such a hot holiday, but because I love it, and the design team loves it. I have more Halloween/dark/creepy products than just about anything else. There have been times when I’ve thought I should break that portion of Ten Two Studios off, spin it into its own web site, and just embrace the dark and creepy stuff year ’round. These are the conversations I have with other artists who use their creative skills to keep food on the table and a roof over their heads—how can I be the artist I want to be, and still pay the electric bill?

Now, I know some of you are picturing me killing off all the lacy, pretty, Victorian stuff in favor of bleeding hearts and FrankenDuckBunnies. Some nights, I lay in bed and think about doing just that, but only in the way you think about doing things like taking a sledgehammer to the wall between the garage and the living room because you need more space, or swapping your bedroom and office because you need more room to work. Well, OK, I’m really doing that last one, but you know what I mean. You think about it, and it makes you a little giddy, but you’re not really going to do it.

So. Baby steps. I’ve been working on a new class this week, that uses familiar images, but also fine art supplies like gesso and pastels and paints. It’s colorful and a little grungy. (Photos of two test pages are posted on the Facebook page.) The first sample book is about halfway done, and it looks much more like the work I do when nobody is looking. We’ll see if anyone signs up for the class when I offer it. That’s always a worry—that I’ll go down a road, and invest time, energy, work, and angst, and then nobody wants to come out and play with me. My little inner outcast sits on the curb and cries pitiful tears…