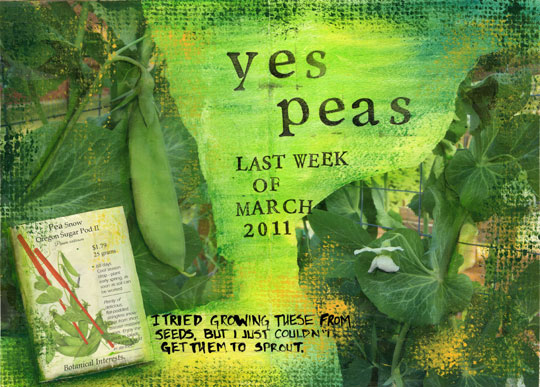 This week’s artwork is a little garden bragging: after careful watering and tending through some way too hot weather, my garden produced its first snow peas. I haven’t grown these before, and almost didn’t this year, because after two attempts at starting seedlings with no results, I was ready to throw in the towel. I found a couple of snow pea seedlings at my favorite local nursery, and decided to throw them in the ground and see what happened. Pea pods happened. Three of them so far. When I get to six, I’m hauling out the wok…

I talk to the plants in my garden, which probably drives my neighbors crazy, and definitely drives their dog over the edge. Molly the chocolate lab wags her tail and tilts her head, trying to figure out exactly what it is that I’m doing. The only thing that’s saving me from getting the head tilt from my own dog is that he’s now completely deaf, and can also barely see. He only cares about me talking when I’m looking straight at him, and then he stares at me intently, as if he’s trying to read my lips.

My dog, Weevil, will be 15 in about a month, which is not that unusual for a rat terrier. Their average lifespan is 16 years, and beyond his cataract-induced gradual blindness, and his complete deafness, he’s still acting like a goofball puppy. He can’t see to jump on the bed when the lights are turned down, but once he’s up there, he wants me to play, rub his belly, and generally be a big dog-warming pillow.

Anyway, now that I’m spending so much time in the garden, Weevil follows me around, because now that he can’t hear me and can barely see me, the only way he can be sure not to miss anything is to glue himself to my heels. He sniffs each plant as he walks by, not because he’s looking for trouble, but I suspect because that’s how he’s navigating his way around. When I planted basil this week, he went nuts sniffing the whole herb garden.

Enough dog talk. Back to journaling. I’m not thrilled with this set of pages, but I’m determined to journal the photos I take this year, as I take them. I might only be able to squeeze one or two sets of pages out each week, but that will be one or two more than I’ve done previously, and by the end of the summer, I should have a nice, fat journal.

I was hoping to get back on track with the Strathmore journaling classes this week, but this second workshop is not as step-by-step as the first, and I’m having trouble following them. I did see one technique I’d like to try, out of the four posted lessons. I’m hoping the third class will be more how-to oriented.

Somewhere along the way, I seem to have lost a large set of watercolor pencils. I know I had some. I think I lent them to someone, and didn’t get them back, or gave them to someone, thinking I wouldn’t use them again. Anyway, I bought a new set this week, and now I can’t remember why I wanted them. I hate that. I get so busy with so many projects that perfectly good ideas go flying off before I can get them down on paper, and then I can’t find them again until they boomerang back and hit me in the head. It’s a good problem to have, but still very annoying.

That’s it for this week. Oh, wait, there’s one more thing: I used to keep a separate blog about my garden and my (currently vegan) kitchen. I decided that was stupid, so I moved all the stuff from Blogger over here this week. The garden stuff is here, and the vegan stuff is here. I probably won’t overlap too much of it into this section, but since the lines between artwork and photography and my garden are getting a little blurry, I thought I should put them all on one site.