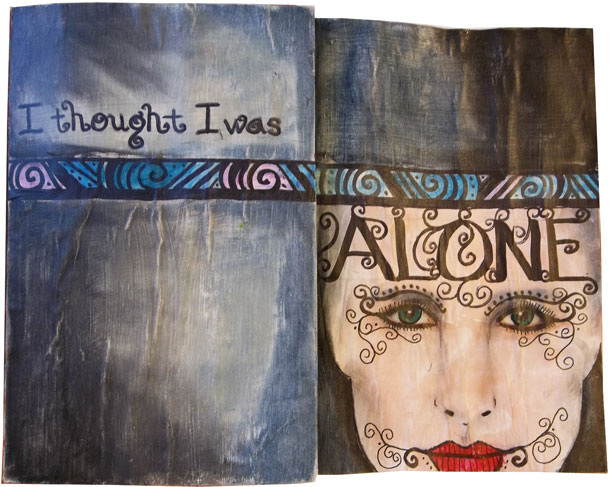 Today’s artwork: the layout I started in Amy’s book before I had surgery. I finally finished doodling on it, and added color. Amy’s book was on the small size for me, since I’ve been working pretty big for the past six months or so. I did a fold out, so I could have a little more room to work.

Amy and I had planned to pass our books once a month, but between my medical disaster and her busy life, we’ve decided to put things on hold for a while. I can usually churn out two or three sets of pages in a month, but it was all I could do to get these done in six weeks. Right now, I can only stand at my work table for 15 or 20 minutes before I start to feel tired, and need to sit down.

Below is the same layout unfolded: 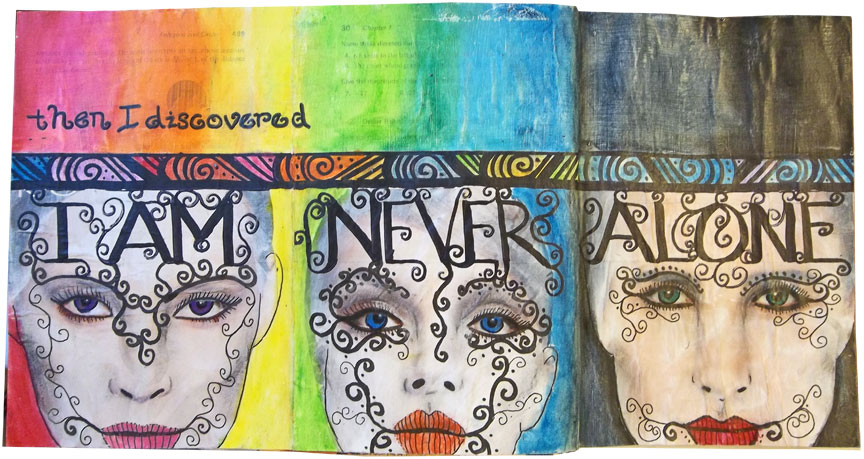 Amanda Palmer tweeted a link to the video of this talk she gave at TED this year. You should watch it. I’ll wait:

(If you haven’t heard of TED, you should follow the link, and find some talks that sound interesting. You’ll probably end up having your world rocked. If you don’t know who Amanda Palmer is, she’s a singer and a magical web presence who raised over a million dollars on Kickstarter for her most recent project. You should give some of her music a try. I’m sure there are some free or pay what you want tunes posted on her site.)

I tend to read things or view things online, and then click the Like button and move on. But, because of what was happening in my life, this particular talk really made me weep. So, I did something I hardly ever do. I wrote to her, and told her about my recent experience with asking for help, and getting it.

And then, I went on with my life, and had surgery, and came home, and was taken care of by many people who said yes when I asked, and paid bills with money that trickled in when I asked for it. I started to heal.

This week, she replied to my email, which is probably sort of a miracle, since she has over 850,000 Twitter followers, and must get hammered with emails. She thanked me for telling her my story, which was pretty much about you folks—how, when I finally swallowed my pride and asked for help, a bunch of you came running.

So, there you go. Someone famous heard about you, and thinks you’re pretty great. And so do I.