Ah, Spring. The season of cleaning out and tidying up. As those of you who downloaded my little April Fool’s Day joke could see, my studio looks like a bomb went off it in. And not in the good way. I’m spending part of this weekend raking up some of the mess. There are large trash bags involved. The dog is hiding under the bed, with the dust bunnies the size of buffaloes. He’s responsible for those, because every Spring, he sheds his weight in fur. If he ever stops replacing what he loses, he’ll be bald in 24 hours, I’m sure.

I know I’m not the only one cleaning right now, because this week, a small, square, dense box of things from Nurse Kevin’s studio found its way to my doorstep. 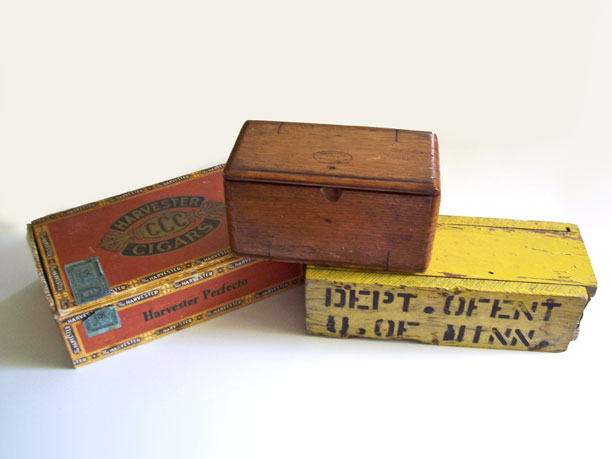 Now, here’s one of the weird things about cleaning out your studio: the stuff that you want to get rid of, other people think you’re crazy for letting go.

I give you Exhibit A: this is the stack of things that came out of the box. Hell would pretty much have to freeze over before I got rid of three such nicely aged boxes. 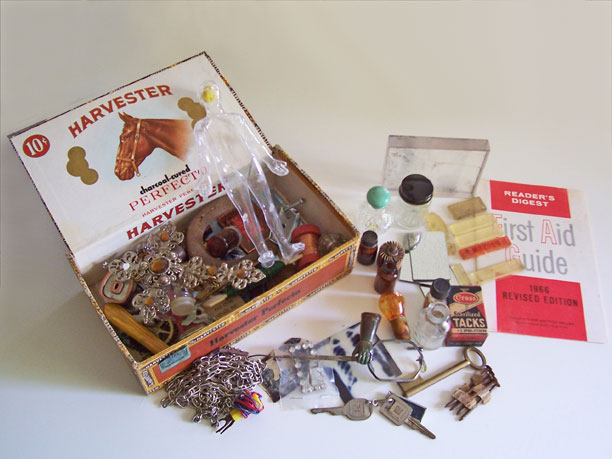 Exhibit B: the contents of the cigar box. When Kevin asked me what I wanted from his pile of stuff, I said, and yes, unfortunately, this is a direct quote, “I can never get enough weird, what the f*ck is this sorts of found objects.” Clearly, Kevin knew exactly what I had in mind, because there are a whole bunch of things that caused me to say just that when I plucked them from the box. He sent me keys to an old GM car, assorted little bottles, rusty bits, and some vaguely medical things, because he is, after all, a nurse. Also, a painted baby doll hand holding half a pair of vintage glasses. I don’t even want to know why he had this, but I’m sure I’ll find a place for it. 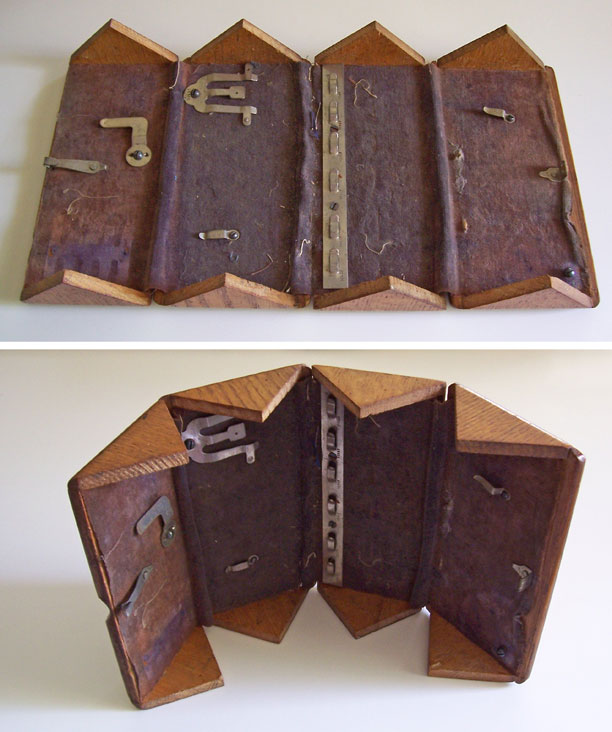 Exhibit C: this is what happens when you open the cute little wooden recipe box, because, admit it, that’s what you thought it was. Nope. It’s a magical box full of possibilities, lint, old, frayed lining fabric, and some metal holdy bits. I have no idea what this box was for originally. Any thoughts? Jewelry box? Sewing box? Hardcore chemical recreation box? (UPDATE: survey says it’s a sewing tool box. Don’t email me telling me this—I’ll make fun of you for not reading this update.)

Of course my eyes lit up when I opened this, and I immediately thought shrine. See how nicely it stands up? I’m sure it’s going to be a four seasons shrine, or an elemental shrine of some sort.

So, no real art this week, unless you count the mad garden planning and massive amounts of digging I did yesterday, but plenty of arty ideas and inspiration. Look for some photo art later this week, because my front yard decided to burst into bloom, and is so ridiculously colorful that at least one person walking down the street or driving by comes to a dead stop and stares at it every day. I work right next to the front window overlooking the garden, and it cracks me up every time I look up and catch someone staring…