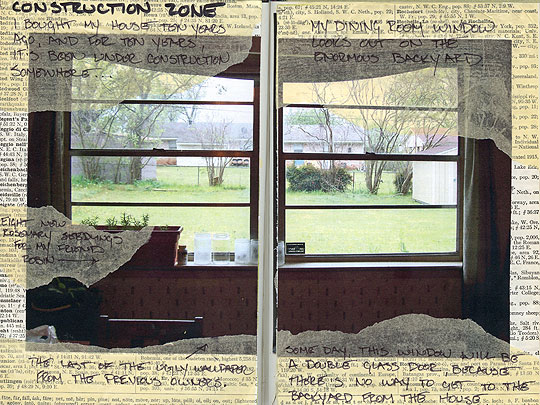 I missed blogging here last week, because I was out in the backyard, working on the vegetable garden. Here in Texas, we have a narrow window between freezing temperatures at night, and brutal heat during the day, and every gardener on my block has started playing beat the clock. We know that come Memorial Day, it’s all over—nothing but the heartiest, most heat tolerant plants can go into the ground after that until the temperatures break in the fall.

Conveniently, I’m working in Patti’s book this month, which is all about artists in their natural habitats. It’s about halfway finished, with work from Patti, Peace and Livia already done. At this point in any round robin, the book has taken on its own life, and I feel as though I have to listen not only to what the originating artist has written, but what the book itself is now saying. What this book is saying to me is that each artist is talking about her little piece of the world through her strongest or favorite creative skill. Patti is a calligrapher, so her work focuses on beautiful journaling, with minimal visual imagery. Peace is into found object collage, so her layouts contain lots of postcards and ephemera. Livia likes to draw, and did two layouts entirely in black Sharpie.

I knew when Patti posted her book’s theme that I would focus on photography. Not my best skill, but boy, do I have a lot of it! I’ve lived in my house for ten years, and have documented many of the renovation projects. I’ve also been pretty obsessive about shooting photos of my ever evolving garden.

I made myself do a layout in Patti’s book today, because it’s grey and looking like rain, so I can’t work outside—and I also worked a little too hard yesterday, and followed that up with eating a wheat salad that caused a mild allergic reaction. Basically, today was a good day to stand in one place and do something that didn’t require a lot of physical effort. Art wins over digging…

So, here’s my layout, closed. It looks sort of rough and unfinished, which is sort of how the house looks most of the time. I wanted to look out the window, and then open it to reveal the outside—which you can see when you view it open.