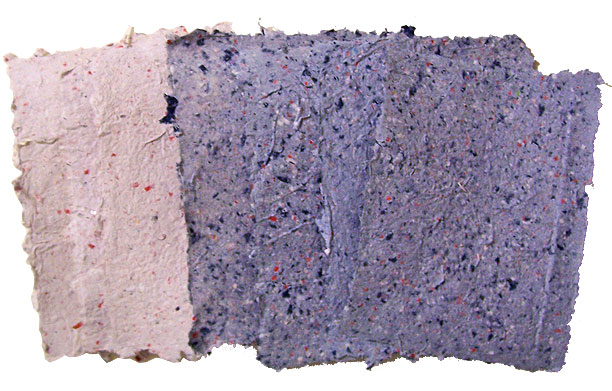 Yesterday, I went to a meeting of my local mixed-media art group. The group has grown smaller in recent months, because we really don’t allow lurkers—you have to participate or find another group. We’ve seen a lot of people pass through, lurk for a year, and then get tossed out because they couldn’t be bothered to RSVP to the monthly meeting invitations. We don’t expect people to show up to meetings regularly—just indicate whether they’ll be attending or not. Seems pretty simple, but apparently, it’s too much trouble. Grr…

Anyway, there were just three of us yesterday, and since the weather is supposed to be relatively mild right now (I write this as the sky grows darker, and instead of commercials, there are weather warning updates during the breaks of the Sunday morning political shows), we decided it was prime time for paper making.

So, I have this thing about making paper from Netflix envelopes. Not the whole envelope—just that tear off piece that turns it into an outgoing envelope. I save them, and periodically chuck stacks of them into my paper making tub. I have my blender, deckles, sponges, and bags of shredded paper all stored in a big plastic tub, which, when emptied, becomes the trough into which I dump blended pulp and pull my paper sheets. It’s a nice, self-contained setup, which you can see pieces and parts of in this paper making lesson I wrote for Go Make Something.

Back to Netflix envelopes: I made my first batch of pulp entirely from shredded envelope sheets that didn’t have colored print on the back side, so they were just red, white and black. I added some extra shreds that were just black and white, from bills and junk mail. I pulled few sheets of what ended up being sort of pale pinkish grey paper with red and white flecks in it. I’ve made this same paper before, so I knew what I was getting.

Next, I tore some navy tissue into chunks, blended it, and dumped it into the Netflix slurry, which promptly turned a beautiful blue. That’s where this pretty chunky blue paper came from. It’s lovely close up, with red, white and several shades of blue flecks in it. All together, I ended up with seven sheets before I ran out of steam. It was hot and humid, because ugly weather was due to blow in later in the day. After seven sheets, even though I had plenty of pulp left, I was over it.

We also did some playing with beeswax while we waited for paper to dry, but it was so humid, it didn’t dry, despite the really lovely breeze that started blowing. I had to bring home wet paper on shop towels, and hang it out in the garage over night. This morning, it was nice and crisp, and peeled right off the shop towels.

There you have it. This week, I achieved paper…