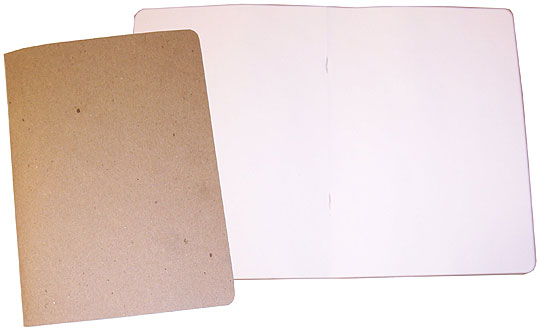 A few weeks back, I signed up to do the 2012 Sketchbook Project. I learned about this last year, after several other artists I know signed up to do it. I read over the requirements, and decided it wasn’t for me, because I couldn’t really do anything resembling a sketchbook.

Well, this year, I read the requirements again, and thought I could do something—not strictly a sketchbook, but something along the lines of the weird hybrid art journal pages I’ve been doing, combining all sorts of media with my photographs. Sketching? Not really. But arting up a book with my original work? Yep. I can do that.

The deal with this project is that everyone starts with the same sketchbook. What I received in the mail was a 5×7 chipboard book filled with lightweight sketch paper that’s folded in half and stapled in the middle. It’s the sort of book I’d throw into my purse for notes while I’m shopping, but not really something I’d ever use for journaling. The rules of the project are pretty liberal: we’re allowed to disassemble the book, swap out paper, and do pretty much anything we want, as long as the book, when shelved, remains 5×7, and no thicker than one inch. 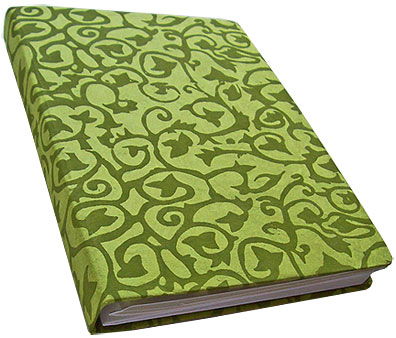 So this week, after contemplating the book, I took it apart, and started rebuilding. There’s a bar coded label on the back that cannot be tampered with, which I was able to peel off, and reapply when I was finished. I cut up the original cover to create the back and spine, leaving a tab on which to attach the new chipboard front. After reinforcing the spine, I covered the whole thing with some leafy green paper. I used the inside paper as a template for my new vellum bristol innards, which fold out in various directions to give me a larger canvas.

The project is still open for sign-ups, so go, read, and if you’re inspired, join in.

More pics as the sketchbook progresses. I’m waiting for my Mammoth Sunflowers to bloom…