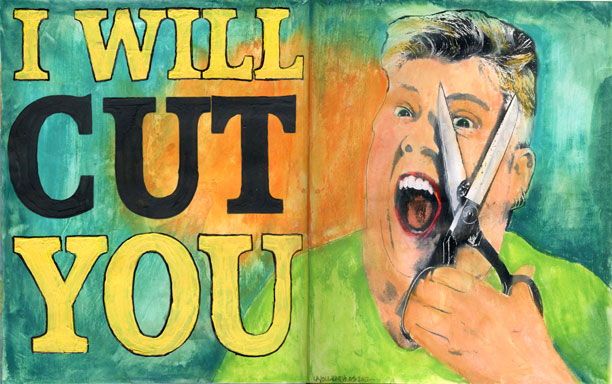 More pages from the dark circle journal round robin. This project has been good for letting me get all my crazy out. Also, for doing a lot of weird self-portraits. I realized when I finished this that it has a sort of Jack Nicholson/The Shining vibe to it.

Our little project sort of exploded recently. We had a participant who was having mental and physical issues, and ended up holding onto books for much longer than we agreed when we started. It went on for awhile, and most of the folks in our group tried to be supportive, but at a certain point, it just becomes so stressful to not know if or when your book will ever be seen again. Frustration finally blew up, and there were bad feelings about it. Ultimately, the woman who was the problem stomped off, still in possession of two books. She says she’s mailed one of them, but it hasn’t arrived yet. We’ll see what happens.

I used to host a lot of round robin projects that were fairly wide open, as long as you could pass a few can-you-follow-rules tests. I used to use a form that was quite specific about the information to be provided, and if the applicant for the project couldn’t read and follow the instructions, I would just pass in favor of someone who could. I was called all manner of ugly names over this practice, but I did end up with people who could follow instructions, email promptly, and might have a prayer of playing well together. People work to different rhythms, and often, those who communicate promptly and mail on time cannot work happily with those who lurk and mail whenever they get around to it.

I find it particularly frustrating when I’m in a project with a whenever kind of person, because they often don’t know what the problem is with people like me. What’s the big deal of the book goes out today or next Friday? The big deal is that some of us are working according to a calendar, juggling our work, life and creative commitments, and when someone else decides to disregard a schedule, it wreaks havoc with all of those things. I work very hard to only take on projects I know I can keep up with and complete. When a week of working time suddenly goes up in smoke because someone doesn’t feel like going to the post office, or doesn’t feel like finishing their work, I’m kinda screwed—and so are a bunch of other people, who are counting on me for a myriad of things crammed into my busy life.

Also, I once read that people who are chronically late subconsciously believe that their time is more valuable that everyone else’s, and that just pisses me off…