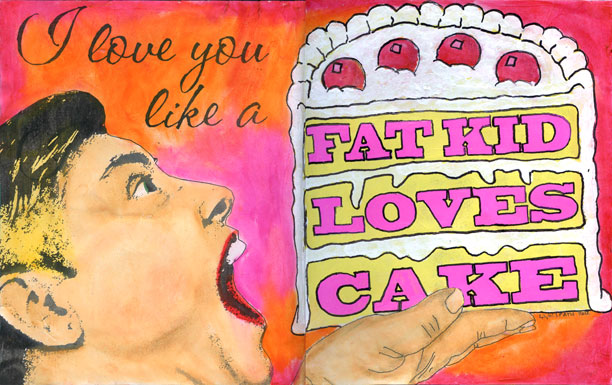 Here’s another set of pages in Denise’s book. She recently became enamored with this expression, so I just had to take a stab at illustrating it. I thought it might not work in a dark project, but since the figure came out so maniacal, I think it’s OK. Maybe not as dark and creepy as a hand holding a bloody heart, but how many times can I really get away with that?

So. This week, I’ve been a whirlwind of activity, which is good, because the last few weeks have been painfully slump-ish. Filming all the video lessons for the da Vinci Inspiration Book class really sucked the inspiration right out of me. Ironic, right? That’s over, and now I’m plotting my next class. Something short and simple, that doesn’t require six hours of video to teach.

I also worked on a piece for a pocket shrine swap I’m hosting on Freakwerx. It’s sort of epic in its own little Altoids tin way. I’ll show you pics next week, since it’s currently laying on its back, waiting for glue to dry before I can stand it up and photograph it. I think it’s really one of the best little shrines I’ve ever made.

I tackled some real life things, too, like mowing the back forty in the blazing heat, in between rain storms, because when the grass gets tall enough for my dog to disappear in it, it’s just time, regardless of the weather. And I managed to bite the bullet and apply to refinance my house this morning, so I can eject another big bank from my life in favor of my local credit union, and maybe pay off my house before I start collecting Social Security, assuming that still exists in the not so distant future. This is the stuff art school doesn’t teach you. How to keep your everyday life running while being an artist and doing all that creative stuff.