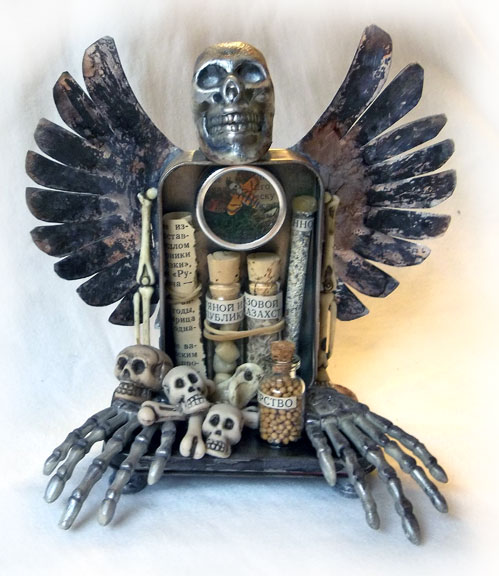 So, I woke up this morning thinking that the year’s half over, and I have nothing to show for it.

OK, I’m not at my best in the morning. In fact, I know that the first thing I do, I will screw up. That’s why I plunk down in front of the computer and play games for an hour before I commit to doing anything. Nobody gets hurt if a few pixels get blown up by mistake, but I seriously should not make myself a smoothie first thing, because a few days ago, I did just that, and didn’t get the base screwed onto the pitcher properly, and ended up with unsweetened vanilla soy milk all over the kitchen counter.

Anyway, now that I’m awake, I know that the year isn’t half over until the end of the month. And I do have a few things to show for 2012.

I’m sure there’s other stuff, but still, that’s not a bad list. 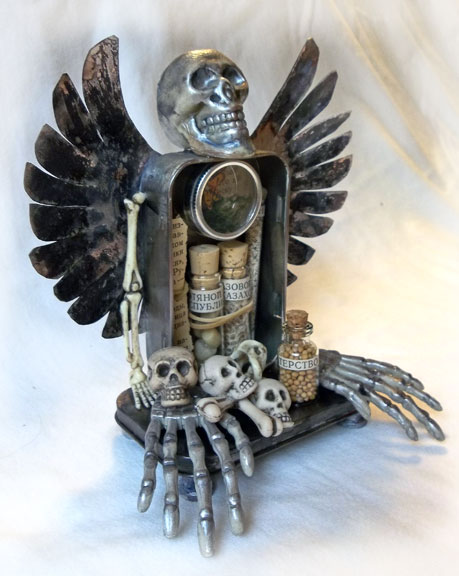 I guess I should say a few words about the big winged death elephant in the room. This piece is for a pocket shrine swap I’m hosting on Freakwerx. My stipulation was that everyone had to start with a metal tin that fits in their front jeans pocket, but from there, they could do whatever they wanted to create their shrine. There are some amazingly weird packages falling into my mailbox this week. I may have video from one of them next week.

Anyway, this shrine started life as an Altoids tin, which I took apart and reassembled, and then just arted up until it had taken on a life of its own. (Or, as one Freakwerx member suggested, taken a few lives.) I’m not really sure what the deal is with the winged death motif. I’ve done this one several times lately, and I’m sure it’s not just because I have a mesh bag full of plastic skulls.

If I can make a couple of winged non-death shrines, this might turn into a class. I think I’d like to teach a shrine class next, because all three of the online classes I’ve put together so far have been about books, and I’d sort of like to do something different now.