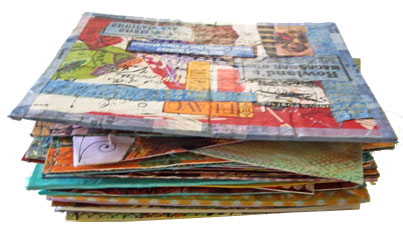 I have no new art to show off right now, so here’s a photo of a pile of postcards. Most of these are from the lovely Corinne Stubson, who kept my mailbox full while I was laid up. I thought I’d show you what I’m doing with them.

Many moons ago, I tore out the closet doors of my studio, turning the closet into a sort of storage alcove—which is a fancy way of saying the damned doors got in my way, so now I have a closet with no doors, and easy access to large covered bins of fabric and trims. Like all things that get torn out and might be usable later, the doors were banished to the garage. 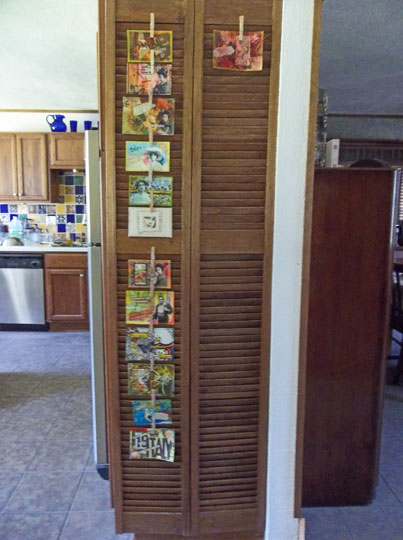 The end of my kitchen cabinets used to stare at the dining room and hallway. From the floor, almost to the ceiling, it was a big, blank panel of wood. It looked sort of stupid. I tried hanging some artwork on it, but it still looked stupid. So, I stained the old closet doors, and put them up. For a long time, this is where decos that came home were stored, so people could grab one or two and flip through them while waiting for me to get my shoes on, find my keys, and put on a jacket. When I did the massive cleaning before surgery, I discovered that many of those decos, which had been hanging about for quite a few years, were collecting a heavy layer of dust. I cleaned them off, and boxed them up, since I don’t really deco much any more. So, now I’m hanging postcards whenever I’m standing around in the kitchen, waiting for something to boil.

(That lone postcard on the right used to be at the bottom left, but my poor little blind, deaf dog tends to run into that spot pretty regularly, so said postcard generally ended up either very crooked, or on the floor.)

Why is there no new artwork here again this week? Because I’m drawing like a mad woman for new Ten Two Studios products, and that’s taking up all my time right now. Maybe I should backtrack a little…

For those of you who missed it, I pretty much banished all my vintage-style Ten Two Studios products to a bargain bin last month. I had a lot of time to lay on my back and think recently, and one of the things I pondered is why I was continuing to create products from vintage imagery when my own work had moved away from that style. How can I effectively create and sell products in a style that I don’t work in myself? Over the last year and a half, I’ve really moved more in the direction of doing my own drawing and painting, or at least working my own art over images that aren’t vintage. It became clear to me that I should probably take my company in the same direction, even if it meant losing customers whose work really is focused on a vintage style. There are a lot of places to find that stuff now, which really wasn’t the case when I started producing collage sheets. I want to make stuff that isn’t available elsewhere.

So. I took a deep breath, and banished the majority of my vintage goodies to the bargain bin, where they’ll stay until I have a compelling reason to remove them. It was a move that was both liberating, and completely terrifying. Hundreds of sheets and sets went into the bargain bin. Very little was left—just a few things that were truly either my own original artwork, or digital manipulations that created images unique enough for me to call them my original work. Mostly, some Day of the Dead things, and some Halloween things, and some cupcakes. That’s it.

And then, I started drawing, and posting teasers on Facebook, and drawing some more. I’m just about ready to start posting art journal page kits that are all original images. Again: liberating, and terrifying.