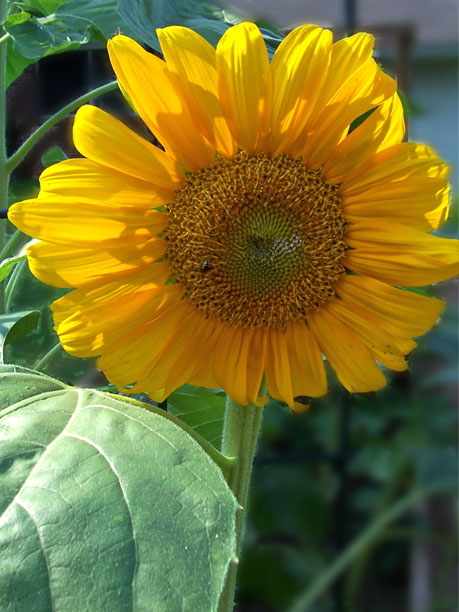 Remember when I did this journal page, back in, oh, February or March? 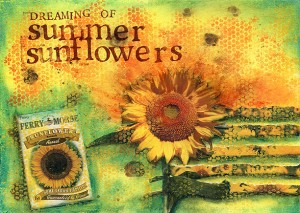 Well, I my dreams have come true. My Mammoth sunflowers have burst into bloom. The first few have been somewhat less than mammoth in size, but there’s one stalk that’s grown over six feet, and hasn’t bloomed yet. I’m betting that will be a big one. I’ve been photographing them like crazy, which means forever more, I will no longer have to rely on stock photography for sunflower shots. I now have my own sunflower photos.

This week, I met with a new art group. My old group has been dying a slow death over the past months. We lost a bunch of members in the annual January roll call, and with a smaller pool of people, it’s hard to get more than two or three to show up to monthly meetings. I decided it was time for me to find another group, because I seriously will become that crazy lady with the dog who talks to herself if I don’t get out of the house regularly. That’s one of the sole drawbacks of working at home and living alone—I have to hunt down interaction with other people.

So, I found a group through Meetup that meets about five minutes from my house, at a little craft store I’d never heard of before that has a huge classroom. And lo and behold, the members interested in learning about art journaling, which is something I’ve been trying to learn how to do better. They’re so interested in it that they’ve added a second meeting to their monthly calendar that focuses solely on journaling. Now I have a place to go every two weeks where people won’t think I’m crazy when I talk about found objects, or the relative merits of various glues. And I have a reason to get serious about doing journal pages once a month.