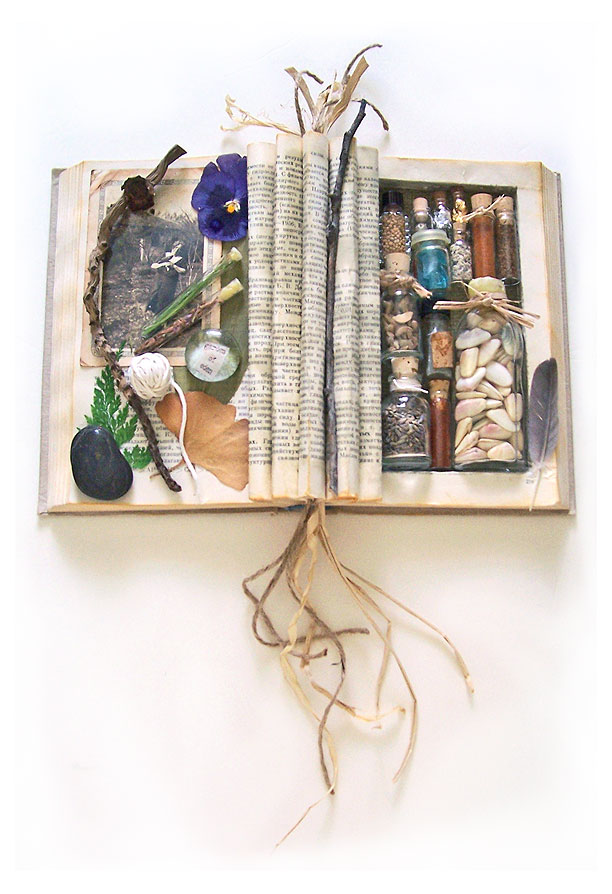 One of the questions I’m most often asked is where I get my ideas. That’s a question that requires a long, rambling answer—but answering it for a single piece is a little simpler. So let’s talk about this one. It’s a wall book: an altered book designed to hang on a wall, rather than sit on a shelf. Instead of using a canvas, or a board, I use a book that’s been made rigid by sheer force of will, and a little bit of steel.

The seed for this book was planted when I saw this altered book by Rachael Ashe: 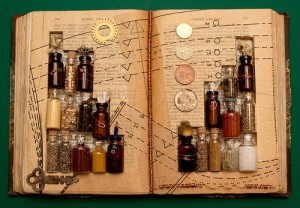 (More of this book is here.)

I loved all the little bottles, but I wanted them to tell me a story. I like artwork that either tells me its story, or lets my imagination create one. That’s particularly true for altered book work. I want a book to tell me a good story. So, when I decided to get off my butt and make something this week, I had this idea in my head—bottles that tell a story. Or bottles that help tell a story.

I grabbed a book, and started cutting. At first, I’d planned to cut both sides, but I realized that those bottles needed some help telling their story. When I had one side hollowed out and filled with a few bottles, I liked the idea of leaving the other side flat. It’s my work table, with stuff scattered all over it. To bridge the two, I did some folding and rolling of pages.

So, if bottles go in the niche, what goes on the work table. I wanted a photo, and conveniently, I have a drawer in my workroom of vintage photos that are no longer valuable enough to preserve. They’re either snapshots that have been damaged, or cabinet cards and CDVs that are faded and foxed. Even though I can do fairly convincing fakes of both photos and cab cards, sometimes, a fake won’t do. I use these real photos sparingly, because they’re one of a kind, and once they’re gone, that’s it. 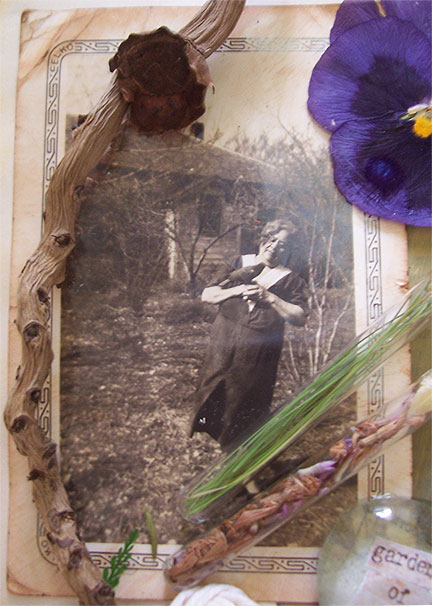 I shuffled through my photos, and tossed a few of them onto the table as possibilities—and then, I found this one, of an older lady, standing outside an old house, with a crow perched on her arm.

It’s one of those photos that makes you look twice, and ask, “What the HELL?”, which are generally the perfect photos on which to base a piece—because now, I can tell the story of this crazy bird lady. Maybe this is her stuff. Maybe she’s some sort of witch, or healer, or that old lady in rural communities that knows all the natural remedies, and collects herbs and stuff.

Did I mention that this piece came entirely from things already in my workroom? I purchased nothing for this. Maybe I’m that crazy lady.

As I gathered her things, and started arranging them and filling bottles, I realized that many items were gifts from other artists. In this piece are old bottles from Kevin Mergen, a twisty stick from Judah Sleep, a ginkgo leaf from Barbe Saint John, and dried flowers from Annie Pennington. Someone (I can’t remember who) sent me those little shells, and someone else sent me white beach sand. Who the heck sent me gator teeth? That’s what one baggie I pulled out what labeled, and it wasn’t my writing. Little gifties from years of exchanges and craft room cleanings came out of drawers and bins to take their places.

And then, there were the things from my garden. The purple pansy I dried this past winter. Dried blooms from my purple agastache, and clippings from bluestem grass seedlings growing on my window sill. A feather from one of the mockingbirds, left under the arbor where they like to perch.

By the end of my second day of working on this piece, I was ready to take a photo. Usually, that’s a sign that a piece is done—I photograph everything as the final step in my process, and once it’s photographed, I’m generally not interested in making any changes. This time, I shot a photo to post on my personal Facebook wall, wondering out loud if it was done. Sometimes, looking at a photo of a piece points out things I can’t see when looking at the piece itself. Empty spots, or some area that pulls focus that shouldn’t. It’s a good way to figure out what a piece needs.

After two days walking by, placing an item, looking at it from different angles, and then removing it, I decided it was finished. Actually, I went out in the garden this morning, to see if the mockingbirds had left me another feather, but the one I saw yesterday had blown away, and no amount of persuasion would coax any of them to drop a feather on me while I was out there—so, I’m over it. The piece is finished.