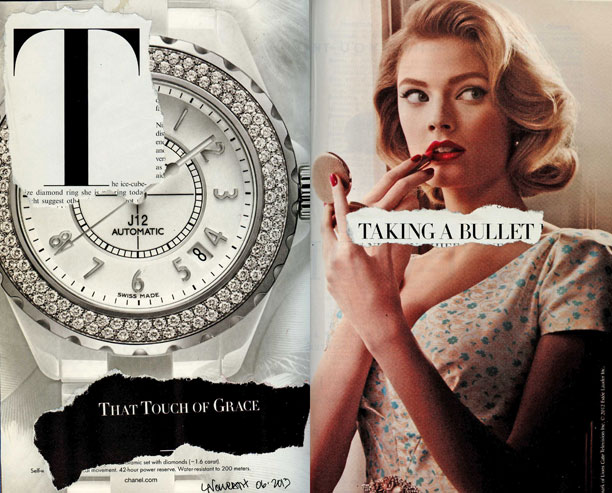 Hey. Look. It’s new artwork! OK, it’s a measly gluebook page, which I put together while sitting on my bed, watching television. It’s a start. Getting back to making new artwork has been like pulling teeth. I have to get over this hill somehow. Gluebooking is a start.

I’ve been needing a big kick in the creativity lately. Something like a big round robin, or a massive swap. But not a round robin or a swap, because round robins and swaps and I aren’t speaking to each other right now. We’re taking a break from each other for a little while.

So, what’s a girl to do when she needs a kick in the creativity?

I’ve been interested in Kickstarter ever since I helped fund Amanda Palmer’s project last year. I love the idea of being able to let people support a project and be a part of it. I like the idea of producing something as a group, rather than just going off and doing it all on my own.

But for some reason, I just couldn’t come up with a good project idea. Everything I though of seemed either really complicated, or not in need of up front funding. I watched projects roll by for months, and never came up with anything myself.

Then, last week, I saw this calendar project by Rachael Rossman, and wondered why I didn’t think of that. Because I love Day of the Dead artwork, and I’ve done a bunch of it in the last year. In fact, I have a piece sitting over there in that chair, and three more sitting on the work table and—oh, gee, I have a bunch of potential new work here. I should do something with that, but not a calendar. I should do a Day of the Dead themed—‘zine. I should bring Bad Influence back, and do another issue.

And so, I started writing, and planning, and pretty soon, I had a solid project, based on something I’ve done before, and know well enough to understand how much time and effort it will take—and how much a Kickstarter campaign could help relieve some of the stress of that process.

On Monday, while I was waiting for Amazon to approve my payment account, so Kickstarter could review my project proposal, my modem died, leaving me without internet service for two days, which—well, don’t get me started, because after endless phone calls and being passed from department to unhelpful, script-reading, overseas department, I finally gave up on the “give good phone, and you’ll get good service” attitude that usually gets me everywhere, and flat out yelled at some poor supervisor in India, and kept yelling until he agreed to send out a service guy, for free, today, to fix the problem. Two days of trying to get work done on my phone pushed me right over the edge.

Anyway, while I was waiting for the broadband light to stop flashing red and mocking me, I put together the artwork for a cover. And then I designed six postcards to use as one of the rewards. And then, I stood at my work table, and did a little work on a set of Day of the Dead themed canvases I started months ago. I felt enthusiastic about working on them—which is exactly what I need to get me motivated again.

So, yay for Kickstarter, for giving me a way to light that fire, regardless of whether the project gets funded or not. Well, no. I will be hugely disappointed if it doesn’t get funded. But I’m happy today, because for the first time since I headed into the horrible health disaster tunnel, I feel like making things.