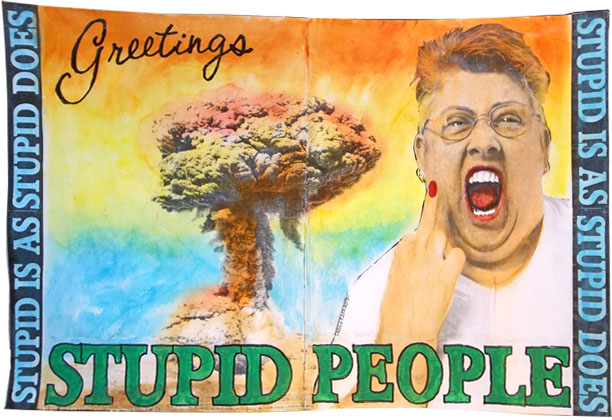 Today’s artwork is in Cindy’s journal. She went off one night about stupid people, and since she’s not really much of a ranter, it tickled me, and I scribbled it on the little page of notes I have going about this project, which is growing shorter and sillier as the books fly by. In general, the work we’re all doing in this project is getting more personal, because we know each other so much better than we did on day one.

In other news, we declared one journal officially lost this week. It went to Australia, and never left, and after seven weeks, we all decided to start a second book for the artist whose original one is lost. That book is already with the second group member to work in it. As a gesture of solidarity, we’ve all agreed that our books should remain with the last person to work in them until we get this replacement finished, and then we’ll all send whichever book we’re holding home to its owner.

In my work life, I put together a new online class this week. After doing over six hours worth of video for my previous class, I wanted to do something quick and simple. I’m also broke-broke-broke, because summer is traditionally a time when my business slows down, as folks rise from their computers and go outside to enjoy the sun. Except here in Texas, where we close up the blinds, put up the solar screens, and crank up the air conditioner. Anyway, I decided to turn the book I made for the circle journal project into a class, since everyone who has worked in it has commented how much they like it. I basically took a pad of my favorite watercolor paper, and turned it into a book by just cutting, folding and gluing. Quick and simple.

As I’m writing this, the house smells of roasting tomatoes. My fridge runneth over in fresh Romas from the garden. Last year, I had none, thanks to the early onset of the heat and the drought. This year, it’s been just a little bit milder, I got the seedlings in earlier, and there’s been plenty of rain. And now, it’s as if I’m getting all the tomatoes for this year, plus the ones I didn’t get last year. So far, I’ve turned four baking sheets of big, fat, juicy tomatoes into a small bag of sundrieds. Two big soup bowls of cherry tomatoes have turned into oven roasted pasta sauce. I picked the first of the okra, and discovered that I can sautee it without it getting slimey, and that it tastes pretty great with chili garlic sauce. I even managed to squeeze out a bowl of fresh black-eyed peas, and a couple of beets, which I’ve never been able to grow before.