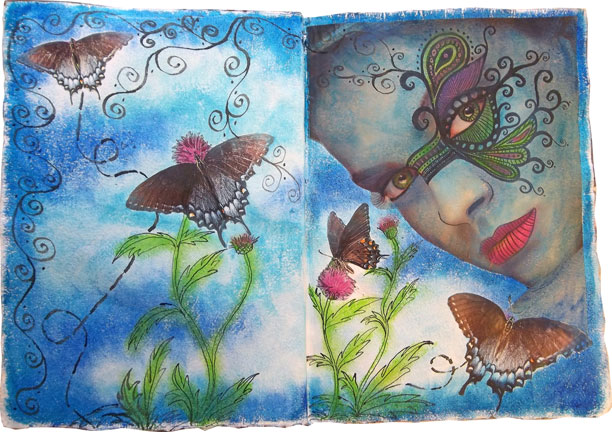 This week’s pages are from my big fat journal. I finally hauled my butt to an art journaling meetup on Friday, after missing several. I brought nothing but this big book to work in, and just sat and colored and doodled for two hours. It was nice to do something that really had no purpose, other than to be fun. My brain appreciated the rest.

Let’s see. I got new Internet service this week, which I thought was going to be a big hassle, but turned out with me getting faster service for way less money. Bonus: the installation came with a phone jack, so now my phone line doesn’t feed through the bottom of the window. I inherited this embarrassing setup from the previous owner, who just sort of ran a piece of cord from the phone box outside, around the side of the house, and through the window, then slapped a phone jack plate onto the end of the wire, so it was flopping around loose on the floor. On windy days, I could hear the cord slapping against the side of the house. Sadly, in the 12 years I’ve lived here, I did nothing about this stupidity, because to have someone come out and install a real phone jack costs a ridiculous sum. However, if you’re being forced to upgrade your Internet service because The Evil Corporate Empire is discontinuing DSL service, you get a phone jack installed for free. And you get Internet service that’s twice as fast. And you get to give up the home phone line that online the computer ever used. And you get a year of service for one quarter of what you’re paying now. Go figure.

It’s just about July, which means I can now start complaining about the heat here. This has been our first spell of days over 100 degrees, and mercifully, it will end tomorrow, when temperatures dip into the frigid 90s again. I’ve started watering the vegetable garden on alternate days, and the front yard once a week. On the plus side, when I sprayed the weeds on the garden paths with vinegar yesterday, they shriveled up and turned brown before the day was over.

I spent this morning making sort of a mess, oven roasting tomatoes, onions and garlic to make tomato sauce. It looks good, and smells great, but the liquid boiled over the side of the roasting pan, and I now have a large bunch of burning tomato goo on the bottom of the oven, and a sort of haze over the whole house from the smoke. This is a bad time of the year to turn on the self-cleaning oven, but maybe I can sneak it in after midnight tonight, and not heat the house up too much.

I’m also spending time planning to unravel a bit of a web mess. It seems my site at Ten Two Studios has now grown so large, and been upgraded so many times that my site is now throwing strange errors for no apparent reason. I’ve long since grown large enough that I should stop using the patched-together WordPress blog with PayPal buttons and a third-party digital delivery service as my shopping cart. I’m going to have to bite the bullet in July, and migrate all my products to a real cart. The prospect of that much work is a bit daunting, but it’s also liberating, because I can dump any products I think are outdated, old, or just aren’t selling, and start with a fresh install of WordPress to handle just the blog and project information. It also means creating a new look for the site that can carry through all the different pieces of software I’m using to power Ten Two Studios.

That’s it for today. I’m off to play with water soluble media…