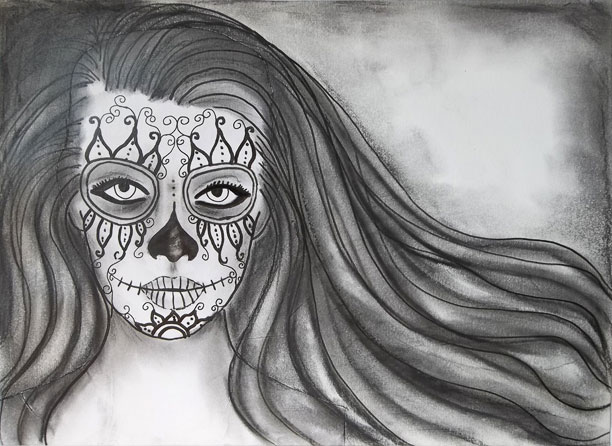 This is something I’ve been working on for a while. I’ve been drawing simple faces in PhotoShop for a couple of months, and I really like them. I decided to pare one down to just lines, enlarge it, and use it as a base for this Day of the Dead face. I got all the pen work done yesterday, and decided it needed a little charcoal shading, because it was very flat.

Yeah. A little shading. I sort of went nuts, and turned it into a charcoal drawing. Now, I’m not sure if I want to add color, or just leave it alone. I’m sure which way to go will come to me shortly.

So. Art. New art. Different art. Art that didn’t start with anything but an idea and a digital pencil. Yay.

In other news, I took a step forward in my non-art life, and started working in my garden. By working, I mean hauling 40lb bags of compost from diagonally opposing points on my property, tossing them into raised beds, and working them into the existing soil. This is the first step in waking the vegetable garden from its longer than usual sleep, and the last of my post-surgery goals.

It’s cruel to plant anything now, when the days are over 90 degrees, and headed into the 100s by August—but every year, insane gardeners in my neck of the woods plant in the heat of summer, to reap a fall harvest in September and October. It’s like some sort of twisted game: if you can get your seedlings to survive through August, you will be rewarded with tomatoes in September. And if you’re very clever, you’ll have tomatoes all the way up to the first hard freeze in November, when you’ll scramble to pick all the green tomatoes left, to ripen on the kitchen counter. I often manage to have garden tomatoes all the way into January.

But first, trial by fire.