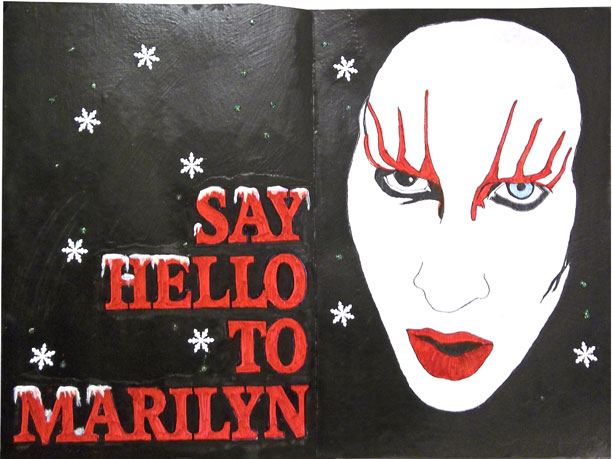 This week’s artwork is a set of pages in Amy’s journal. This set of pages includes my first, and probably my last, portrait of Marilyn Manson. This one came from a long, crooked thought process, which I can only hope to boil down to its essence here:

One of the great oddities of being me is that I attract all sorts of freaks and weirdos—and not always the good kind. People feel they can email me, or post to my Facebook page, and say anything. Sometimes it’s nice stuff, and sometimes it’s funny stuff, and that’s great. Sometimes, though, it’s mean stuff, or crazy in the way that makes you want to check that the front door is locked, and that’s not great. Via email, in particular, I sometimes get messages that hurt my feelings, or make me feel as though I’m not safe communicating with the sender.

When someone really, really upsets me online, I mentally banish them to Siberia. I block them from viewing anything I’m doing wherever I can, black hole their email address, and basically make it impossible for them to get to me again. I don’t do it often, and I don’t do it lightly, but when I do it, it’s swift, and permanent. Once someone is sent to Siberia, there’s no coming back.

I shared the idea of banishing someone to Siberia with another group member who was having similar problems–because, I’ve come to learn, many artists who put themselves out there have these same issues. Someone was leaving comments on her blog and Facebook page that made her uncomfortable, and she wasn’t successful at ending the behavior, and it was bringing her down. The other artists in the group liked the mental image, and it stuck. The battle cry SIBERIA! is now posted by one or another of us whenever a group member shares that someone is behaving badly online. I know this sounds silly, but it’s a great relief when someone is attacking you online, or sending mean emails, or just making the lives of everyone in a group miserable to be able to share it with a small number of friends in a protected environment, and have them all say something that makes you laugh and feel better while you decide what to do about it. That’s what SIBERIA! does for all of us.

So. One day, someone named Marilyn was being particularly snarky to one of the group members on her page, and that member shared her distress, and we all cried SIBERIA!, and laughed, and talked about what was going on, and then the requisite actions were taken. Except that the name stuck with us, and somehow, any time Siberia came up, so did Marilyn. Not the actual Marilyn, but a sort of symbolic one—a lone figure, sitting in a blizzard, far, far away.

And then, one night, after Amy had a particularly bad day with someone on her Facebook page, and I went and looked, and saw that the comments being left were really out of line, I said, “It’s time for her to say hello to Marilyn.” And that took the place of SIBERIA! Now, we use infinite variations of the idea that whoever is being an idiot today should go visit Marilyn, and it’s even sillier than Siberia, and makes us all laugh harder, which is generally all that’s required to make whoever is in trouble feel better, and move on.

When I received Amy’s book, I knew I wanted to do something with “say hello to Marilyn”, but I wasn’t sure how to illustrate that expression. I played with snow images, and that didn’t really seem to work. I tried a variety of the images I’ve been using lately—atomic blasts, women with knives, me flipping the bird. Nothing seemed to fit. And then someone posted a Marilyn Manson song in their news feed, and I suddenly had this mental image of him sitting in a blizzard in Siberia—and that’s what fell onto this page. Sort of. Except the snow turned into a few flakes, because I really needed the black background. So now, it looks like a page about Marilyn Manson, until you look closer, and wonder why there’s snow piling up on the lettering.

One cool thing I learned that I didn’t know: Marilyn Manson paints watercolors. You can Google this and see all sorts of interesting, dark pieces he’s done. Go figure…