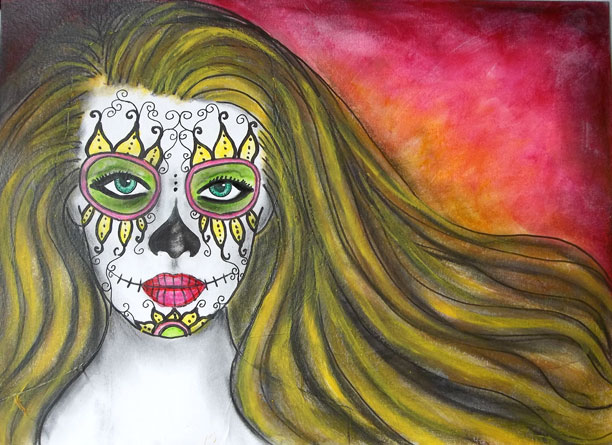 This is the piece I showed in greyscale earlier in the month. It’s been sitting on my work table, waiting for color for almost two weeks. I finally broke down and finished it this morning. It took all of 30 minutes. Here’s the progression:

This could be a class soon. Maybe not so much Day of the Dead faces as just simple, colorful journal page girlies. We’ll see. I’m doing a reader survey at Ten Two Studios, and so far, the overwhelming response is MORE CLASSES!

Meanwhile, the Bad Influence Kickstarter campaign switched over from “days left” to “hours left” this morning. It ends early on Friday. I’ve been hovering over the page for a month now, first thinking there’s no way I could raise that much money, and then wondering how I’m going to get all those ‘zines printed and shipped, and do I have enough artwork coming in to cover extra pages. I worry. I shouldn’t. Things do tend to get done around here, workwise.

So. I’m still stapled to my computer chair, for the most page not doing things like going for walks or gardening or artwork. I did start the layout of Bad Influence, and all the artwork I’ve received so far is in it. I also managed to get all the how-to books and ‘zines I’ve created at Ten Two Studios reformatted and turned into publications for sale on CreateSpace, and later this week, on Amazon

. I tweaked a new theme for this web site, because the one I’ve been using for too many years is old and stale, and wasn’t really what I wanted in the first place. I’m not sure the new one is what I want, either, but it’s different, and will put the focus on my art, which is good. I’m still sort of in a tear it all down and start over frame of mind, so I might be removing a whole lot of older art from the site, because it looks so not like what I do now.

It’s been cooler and rainy here the past few days, so the Desert Willow tree outside my window has started blooming again. Its blooms attract tiny hummingbirds, who sip the nectar, and occasionally, park themselves on the willow’s delicate branches. They just sit there for a few minutes, bobbing up and down as the breeze moves the branches. It’s weird to see hummingbirds sit perfectly still.

If I have to be stuck in this chair, afraid to move, at least I have an interesting view…