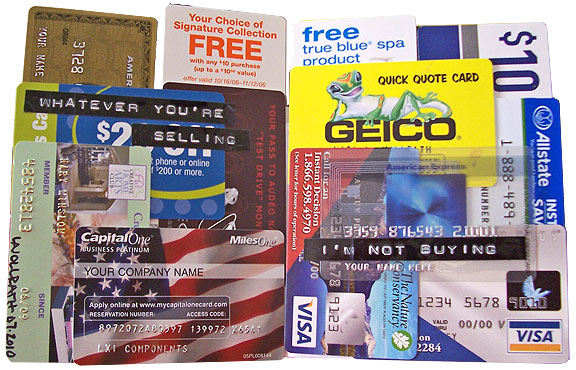 Wednesday was mailing day for the BYOB round robin, so I spent the early part of the week finishing up Corinne’s book. As usual, an idea for one more came to me the day before it was due to go out, so I chose a small set of pages, and used some of my enormous collection of fake credit cards and gift cards to vent my bad attitude. (There was also a happier layout I’d started earlier that needed its final touches, which can be viewed in the project gallery.) I enjoyed working in this book very much, and really wish I was free enough to make something this random and crazy—but every time I try, my sense of order forces me to make the pages relatively the same size. My all trash book that I started for this project and set aside after seeing Corinne’s is probably going into the recycle bin, because now, it really looks silly with its perfectly cut pages. Maybe next time, I can make myself embrace the disorder.

Yesterday, I dragged my lazy butt to the monthly meeting of the local mixed-media art group. Livia brought a handful of one page ‘zines from a recent swap, some of which were quite clever. I hauled out most of my ‘zine collection, and brought them for show and tell. These meetings are a nice break for me, because while everyone else makes things, I sit there and watch, and chat. I generally don’t join in the project activities, because it’s my day off, and making stuff is sort of what I do for work. The exception is when I’m teaching the project, because then I kind of have to make whatever it is as I teach.

In other news, it’s hotter than, well, just about anything here in North Texas. Although today’s temp will be 101, the heat index is 110. My garden is angry, and I can only really work in it after 6PM, when the sun dips behind the trees—and even then, I come in with a red face and soaking wet clothes. It’s ridiculous, and I’m not entirely certain why sane people decided this was a good place to put a big city. Perhaps they weren’t quite right in the head…

My slump rages on. I had to force myself to make things this morning for a project article. Mostly, I just want to lay on the couch under the air conditioner vent, with a fan blowing on me, and watch DVDs all afternoon. It’s not entirely pleasant, since the dog insists on laying right up against my side, and he’s like a little blast furnace.

Oh, and yesterday, I bought a new Dremel, to replace the one I burned out five years ago drilling holes in 120 juice lids, for a demo at CHA. I’m not sure why it took me five years to replace it, or why I got it into my head that I absolutely had to have one yesterday (so much so that I drove around to three different stores before I found the model I wanted at the right price). I do know that I’ll be using it to drill holes in dominos this week…