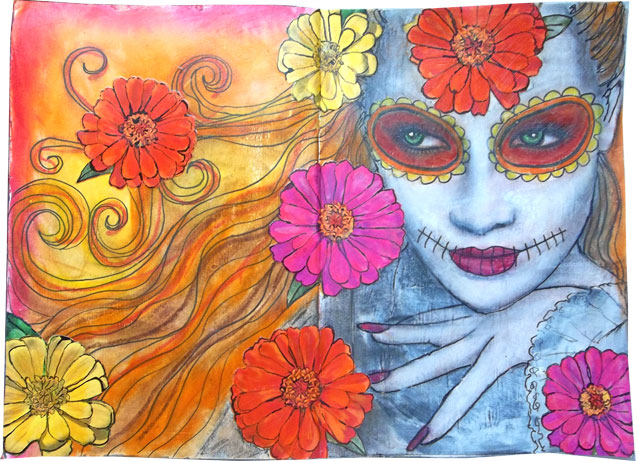 These are pages I did in Amy’s book for our circle journal project. I really didn’t intend to do any work in this style in her book, but none of the ideas I had were gelling, and I just felt like I had to put something down on paper rather than sitting here staring at blank pages, so there it is. While I was waiting for a really good idea to come together, I did a little magazine doodling. And now, I still don’t have a concrete idea for some really good pages, and the next book is on its way to me.

Really, Amy’s book was supposed to be the last book I worked in before they all go home to their owners, but we had one complete flake in the project who sat on two books forever, gave all sorts of “my dog ate it” excuses for why she hadn’t worked in them, and finally was told she should send them forward unworked, and sit on the bench until she had her ducks in a row again. She opted to stomp off in a huff, mailing one book onward weeks later, and hanging on to the second one for so long that we finally started a second book to replace it, and passed it around quickly. That book is on its way to me now, and when I’m done, one more person has to work in it. In solidarity with the artist whose book was lost, we all decided to have our books remain with the last artist to work in it until her replacement book had gone all the way around, and then mail them home all at the same time.

Anyway, that means that once I finish working in the replacement book, I can come back to Amy’s to do one more set of pages. Since I’m the last person to work in her book, and there are plenty of blank pages left, I’m hoping to do a little extra. Hence, the “while I was waiting for a good idea” pages for this week. What the heck. It’s better than blank paper, right?

Two things I wanted to mention, that you might have missed:

First, look up at the top of the page. I changed the navigation slider just a little. It has less vintage-inspired work, and more of my newer stuff. Also, the sections have changed slightly. I added one for journals and gluebooks, since I suddenly have so many things to put in it. I removed the section that was my writing, since most of that stuff was really old, and not particularly relevant—and since I’ve managed to stick with this weekly blogging thing for two years. I also cleaned out a bunch of older blog posts. Some day, I’ll conquer cleaning out the old artwork, since a lot of it looks nothing like what I do now.

Second, my work was featured recently on one of my favorite blogs Skull-a-Day. Yay!