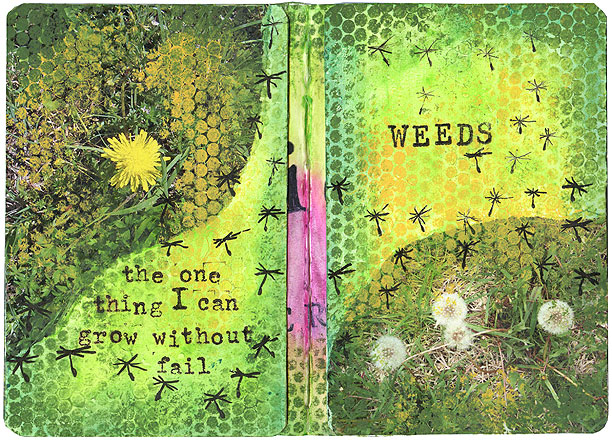 Over on my Facebook fan page, Denise asked about this set of journal pages that I posted last week. This is part of the work I’ve done in a journal for The Sketchbook Project. I’m sort of doing a sketchbook all about my garden. Except there isn’t much sketching in it.

OK, I drew the little floating bits blowing around the weeds on these pages. That counts, right?

Anyway, Denise wanted to know if the pages fold out, because there’s that nice racing stripe of pink stuff up the middle. The answer is yes, they do fold out. Like this:

Usually, when I do foldy-outy things like this, I design them so they’re more subtle. I like surprising the viewer with whatever is hidden behind the flaps. However, this book is going to go on tour, and be viewed by people who might never have handled an altered book, and are expecting to flip through a sketchbook like they would any other book. I intentionally inserted pages that fold out, up and down, and I’m not doing much to hide the fact that in order to view the work in this book, you have to interact with it.

Unfortunately, I’ve watched many people flip through my altered books, and miss the foldy-outy things. They either don’t see them, or don’t think they’re allowed to open them. I think part of that is the hidden surprise thing. They can’t see that there’s something more underneath, so they don’t want to poke around and see if there might be more, because they might be doing something that will hurt the book. Since I won’t be there to say, “go ahead and open it”, I’m doing it visually. If I handed you this book with the fold-outs closed, you’d want to know what that pink stuff is, wouldn’t you? So, you’d lift a the flap a little, and peek, and seeing there’s something there, and discovering that lifting the flap won’t cause the book to burst into flames or fall apart in your lap, you’d probably go ahead and open it.

There you go. That’s me, over-thinking things…