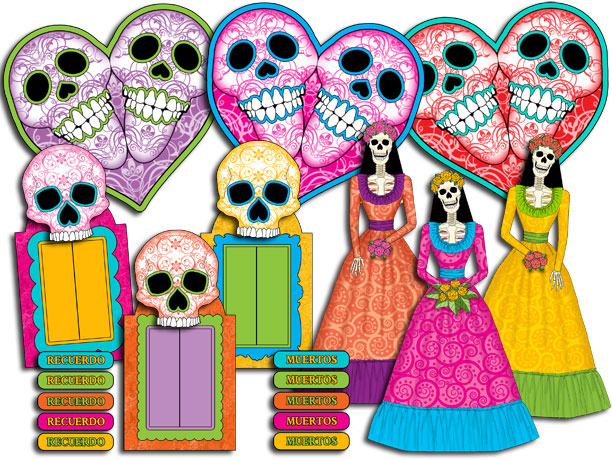 No new personal artwork this week, but tons of new art on the business side. These are graphics for three new sets of matchbox shrines. I spent my week putting the finishing touches on these, and then making shrines from them. I photographed step-by-steps for each set, so they can be turned into digital kits later. The finished shrines will be photographed for the kits and for the Day of the Dead issue of Bad Influence. Then seven of the shrines will be sent out in reward packages to backers, and the other two will go up on Etsy.

And that’s the kind of planning that goes into every day of my business life.

The other project on my work table is the first of three “I’ll Day of the Dead Your Face” pieces promised to Kickstarter backers. The premise goes like this: email me your photograph, and I’ll turn it into a mixed-media Day of the Dead portrait, and send it to you. I’ve never really done this before, but in theory, it should work out pretty well, since people can often tell which actresses or models I’ve used in my magazine-based portraits. So far, the first one is looking good.

Did I mention I planted things in my vegetable garden? So far in July, I’ve put in cherry tomato seedlings, and seeds for Thai eggplant, okra, cowpeas, and acorn squash. The garden is still kind of a wreck, since I missed months of weeding and maintenance, but it’s getting there. The weather here has been odd for July, alternately blazing hot, over 100 degrees, and cool and rainy. The rain part is great, and so is the cooler part. It’s always a battle with the elements trying to get the fall garden started at the height of summer.

Little by little, life is starting to feel more normal.