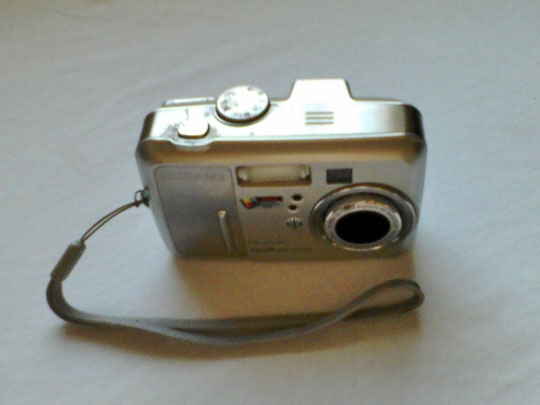 This, dear friends, is a photo of the camera I’ve been using for the last seven years, taken with my crappy phone camera. Today, I did what I often feared I would: I dropped it on a concrete floor, with the camera on and the lens extended. And I killed it.

I use my camera daily. It’s such an integral part of what I do that the camera dock is conveniently located so I can reach in the office door and grab it as I’m walking down the hall to my studio. Without it, I’m out of business. Well, not actually out of business, but definitely sidelined. This afternoon, I was putting the finishing touches on a new kit, and one of the last things I generally do is grab one of everything in the kit, including the instruction sheet, and photograph them, so people can see what they’re getting. It didn’t occur to me until I was walking into my studio with an armload of stuff that I couldn’t take that photo, because my camera is dead.

On the plus side, I ordered a new camera this afternoon, and forked over the extra bucks for one day service. It’s probably going to be here on Monday. I think I paid about half what I did for my old one, and I’m getting way more megapixels, a bigger screen, better video—and it’s purple. It’s also another Kodak, because as inexpensive point-and-shoot cameras go, this last one was a winner: easy to use, lightweight, plenty of features I used, and not too many I didn’t. Here’s hoping the new one is the same.