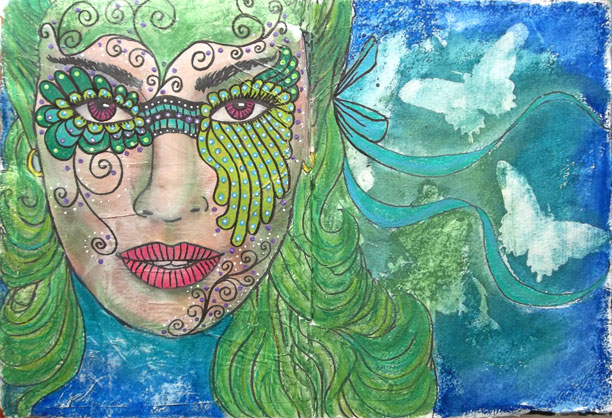 Today’s pages are from my my big fat journal. I’m not sure these pages are finished, but I’m done with them. I got tired of working on them, and rather than work them to death trying to get them to go somewhere, I just put the sealer coat on, and moved along. Done.

This has been a month of being done with things:

I killed off The Monthly Muse, after seven years of publishing it. Done.

I’m in the process of building a new web site for Ten Two Studios that will be responsive to things like smart phones and tablets, and to do that, sometime next month, I’ll have to completely delete the entire current site, remove all the software that drives it, and move a new, relatively bare site into its place. Three years worth of design team eye candy posts will get deleted with it, which was a hard choice to make—but the images are safely stored, to be reposted over the next year. I’ll be dumping my current cobbled-together shopping cart, and third party digital delivery service, in favor of a third party service that will handle both, so I’ll be migrating about 400 products in the next couple of weeks. Decisions made. Done.

This morning, I tore down the site I used to run The Original Printables Holiday Countdown, which I’ve been doing on one site or another since 1999. I’ve decided not to do it any more. It’s too much work, for not enough return, and to be honest, I’ve given away so many images that I just think I’ve done my share. There are over 1,000 sheets of free images posted at Go Make Something. That’s enough. I’m done.

Now, what else can I check off…