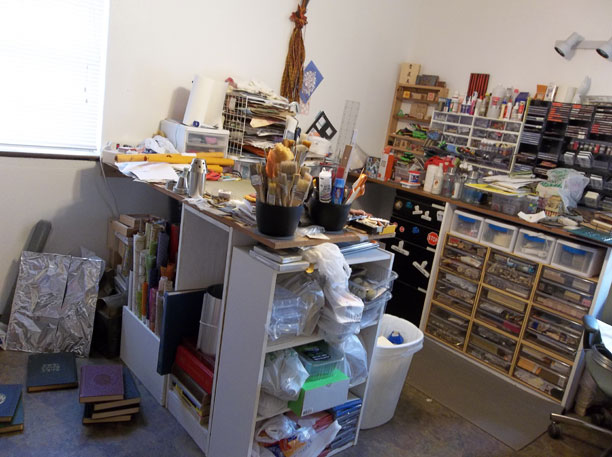 I don’t have any new art to show this week, so I thought I’d show you the current state of my workroom. I know. It’s bad.

In my defense, I’m working on videos for an online class I’m hoping to announce soon. I started working on a basic ATC class, but I got bogged down in what exactly I wanted to do with it, and whether anyone on the planet actually needs a basic ATC class at this point. Yesterday, I moved on, to a class I actually sort of taught in real life to my local group last month. Except I only had two hours, and really this class should take weeks. Which it will, when I get the online class together. But first, I have to do a bunch of videos, and some written lessons, and maybe a few collage sheets. Oh, and samples. Lots more samples. Which is why my workroom looks like someone tossed a grenade into it.

Actually, that’s not a bad idea at this point. Tossing a grenade in. Because it’s bad. It’s really bad. It’s time to drag in the big trash can, and toss some serious junk. And before you ask—yes, the rest of the house is also a mess, but not like this. I do manage to control the clutter elsewhere. Right now, the whole house needs a good floor mopping and dusting, or a couple of hours of maid service.

There is one portion of the house that is relatively free of clutter: 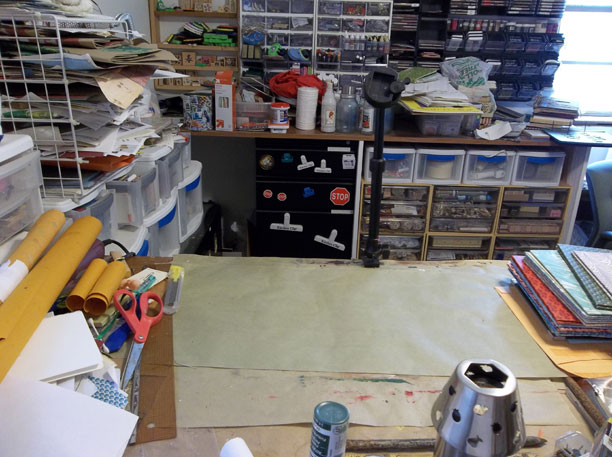 This is the two square feet of my table that you usually see. It’s where I shoot hand shots for projects. That black thing clamped to the table is a monopod for the camera. I just bought a quick-release for my new camera, so instead of screwing it onto the pod each time, I just flip a lever and slide it into place. It’s brilliant. I saved a ton of time last night, as I moved back and forth between the work table and the computer, shooting videos, and then downloading them to turn them into Flash files for the classroom.

Oh, and did you notice that I didn’t start this post with complaints about the weather? Today, we’re having our first double digit high temperature in two months. I celebrated by cooking something in the oven this morning—something I just don’t do in the summer unless I absolutely can’t avoid it. Tonight, it’s supposed to be in the 60s, which is about twenty degrees cooler than it’s been at night all summer. I intend to throw open the windows, shut off the air conditioner, and enjoy the heck out of it.