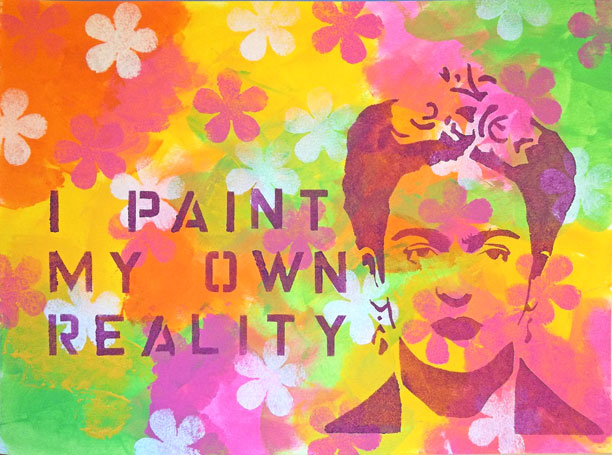 This week’s art is a page for my new Quick Stenciled Pages class. I don’t usually flash work things on this blog, but this piece is relevant to what I’m about to write, so I’m making an exception.

I’ve been thinking a lot lately about the way make people to pay for things, rather than letting them pay. In a perfect world, I would make stuff, and film videos of how I made it, post them for free on YouTube, and then give the stuff away. Wouldn’t that be cool?

Unfortunately, my life doesn’t allow that. I have a mortgage to pay, and bills, and I have to eat occasionally. I have to make money with my art. Unlike most artists, my most marketable skill is not the actual art—it’s the how-to part. I explain stuff well. For the most part, that’s what makes my living.

So. For a long time, I’ve been teaching people how to make things. Sometimes for free, but, more and more, for pay. I’ve gone from writing free lessons at Go Make Something, to inexpensive monthly lessons in The Monthly Muse, to online classes at Ten Two Studios. Those classes? They’re not free. And some of them are expensive, because there’s so much time invested in making them. Expensive classes mean only a few people get to see that information—and the rest are just out of luck.

Shouldn’t there be something in between I it away for free and starve, and sorry, you can’t learn this because you’re broke? I mean, we’re smart people. We should be able to figure something out that keeps a roof over my head, and still allows pretty much everyone to benefit from all this stuff I’m creating.

That’s the first model I’m exploring. That new class is posted as pay what you want. You can take it for $5, or for $30, or for quite a few options in between. My hope is that some people will take it for a few dollars, and others will take it for more dollars, and we’ll all feel like we’re getting a good deal. We’ll see what happens.

And I have another model to explore, that I’ll talk about shortly…