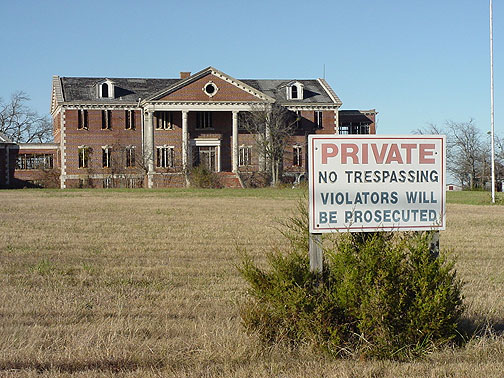 I’m counting down the days until—-VACATION! I leave at the crack of dawn Thursday, for five days off. The last time I took a vacation was in May, 2005, before I started Ten Two Studios. I need this break. I’ve earned it. I. Can’t. Wait.

Along about Wednesday of this week, I started making to-do lists, because the amount of work I have to finish before I leave is positively frightening. Also, I have real life things to do, like mowing the front and back yards, getting the dog to the vet to board, and gee, I still haven’t planted some of my fall vegetables. That last one is nagging on me, because today, we had the big 20 degree temperature drop, from mid-90s to mid-70s. This is our fifteen minutes of autumn, and now is the time to get things done in the garden, before we get slapped upside the head with the first freeze and winter.

Meh. Yesterday, I had a once in a lifetime experience. My all-time favorite creepy old falling down house, which is generally closed to the public, wrapped with barbed wire, and surrounded by No Trespassing signs was open to the public for four hours. It’s the first time this has happened since the house closed in the 1970s. I’ve been shooting photos of it since I moved to Texas in 1993, but always from outside the barbed wire fence line. Some of my former college students fessed up this week that they broke into the place at night when they were going to school—and I’m pretty sure I would have risked it and joined them. That’s how much I love this house.

So, it was grey and gloomy, and it rained in the morning, but by the time we got there at 10AM, it was dry enough to tromp through the tall grass to walk around the property, and shoot photos until I couldn’t see straight. I ended up with a full memory card, plus a little on a spare card I threw in my bag, and over 200 photos.

In general, I sort of suck as a photographer. I thank the photography gods for sending us digital cameras, because I’m old enough to have been a really bad photographer using film, and it cost me an arm and a leg in processing costs to see my terrible photos. Now, I can shoot two hundred photos, and not feel too badly about it. Here are about 60 halfway decent shots, including one or two that will be beautiful after I work a little PhotoShop magic on them. Don’t even get me started on how thankful I am to have acquired mad PhotoShop skills…

Anyway, this was truly the best day ever, because I finally got to touch this house, and walk around in some of it, and rub elbows with a whole bunch of people who love it as much as I do, including my dear friend Wendy, who tromped through mud and chigger-infested grass with me, pointing at things I should photograph. Bad photos aside, this house makes me work harder to see through a camera, and keep at it until I get the shot I want. I love that. Even with a to-do list that’s a mile long, and a crazy week ahead, I wouldn’t have missed this day for the world.

More info about this house, including where it is, and some of its history, is on my new Squidoo lens about it. Yeah, I’m that much of a geek…