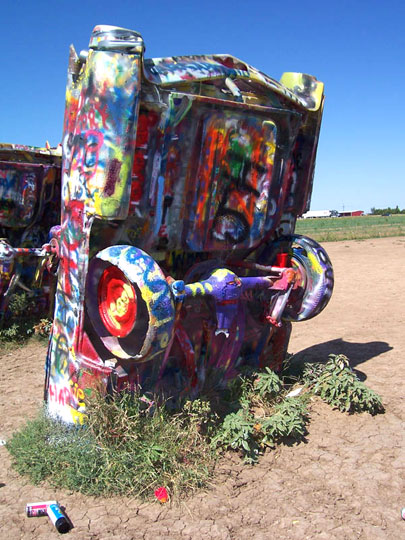 So. I’m back from my vacation in Santa Fe.

First, we drove. Actually, Livia drove, and I took up space in the passenger seat, playing with my new smartphone. Yes, I finally caved in and joined the 21st century—because up until now, I’ve had a land line at my house, and no cell phone. I did have a mobile phone sometime in the early 90s, which had to remain attached to the car, and came with a laptop-sized battery suitcase thing. I haven’t really ever wanted a cell phone, but now that they’re little portable computers, the allure was too much for me. I can now stand in a nursery and Google the plants I’m thinking of purchasing to find out just how quickly they’re die in this part of Texas. It’s great.

Anyway, Livia drove all 1600 and something miles of our trip—to Santa Fe, all around New Mexico for five days, and then back again. That meant I got to do the navigating (with hep from Virgin Mobile Navigator, and the GPS voice I christened “That Bitch Marcy”, and Google maps, both of which were loaded in my phone), and a lot of staring out the window. 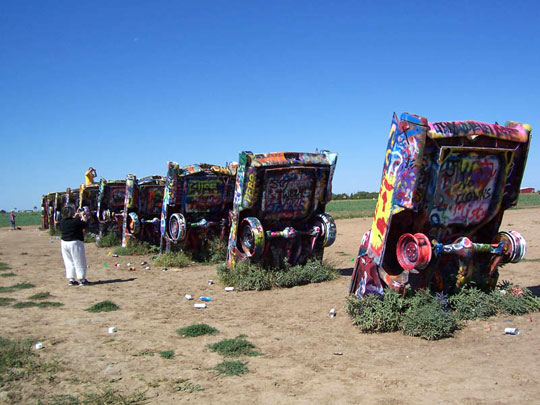 Since Livia is also an uber-arty type of girl, we sort of focused on going places that were visual—starting just a few hours out of Dallas at the Cadillac Ranch in Amarillo, where I shot these photos. It’s a hoot: ten old Cadillacs, standing nose down in a big empty field, mercilessly spray painted for decades by passers-by. I shot tons of pics, and liked the place so much, I made a Squidoo lens about it. I even photographed a couple of teenagers climbing to the top of one of the Caddies and spray painting their names on it.

In Santa Fe, we did very few touristy things. We did go to the Georgia O’Keeffe Museum, which is right off the Plaza, but avoided all the other places in that area, because they were swarmed with people. Instead, we spent an afternoon wandering into dozens of galleries on Canyon Road, where I wrote down the names of lots of artists whose work I admired. I’m hoping I’ll be able to track some of them down online, and share links to their sites in the weekly newsletter in coming weeks.

We also visited Madrid, a funky little hippie town between Santa Fe and Albuquerque, filled with artists who have converted the houses on the main street going through town into galleries and studios. It was great to spend a whole day talking to artists everywhere we went.

And oh, did I eat! Santa Fe is very vegan-friendly, and I found lots of fun stuff to try everywhere we went. I even had desert a couple of times—a big splurge for me, because I’m basically a sugar-free kinda girl. 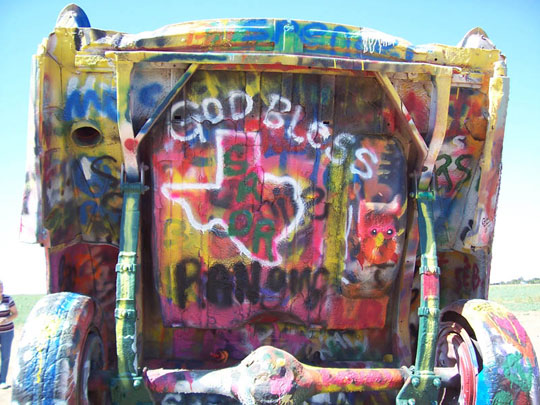 After five days of constant visual overload, I’m sort of stunned. Since returning home, I haven’t made much art—but I did spend the last two days painting my garden shed a bright, vivid blue. I bought a big talavera sun face in Madrid, which now hangs on the door. It’s like a little piece of my Santa Fe trip in the corner of the garden…

Vacations. I need to take more of them.