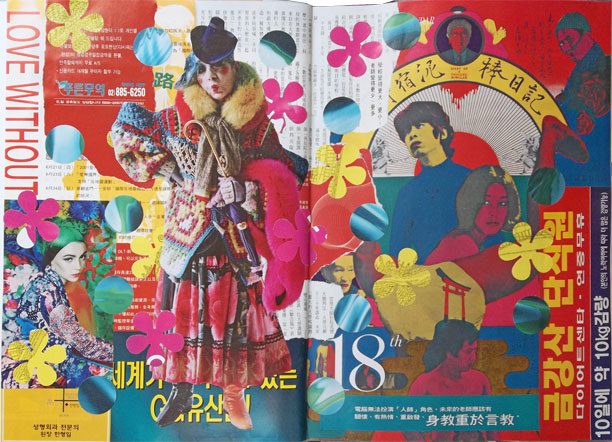 This week’s artwork is a set of gluebook pages. I started a new gluebook, because apparently the three that I already have going weren’t sufficient. This one is large, with pages that are almost 15×20 inches when open. That’s roughly the same size as the art journal I’ve been working in for the past year or so. I like working big, and I’ve been feeling sort of cramped in my other gluebooks. And now, I think I’ve run out of excuses for starting a new book…

I decided to blow a few layers of dust off Go Make Something this weekend. I haven’t posted anything there in over a year, and lately, I’ve been wondering if I should start up again. I’m contemplating a plan that might allow me to do that, and not go broke, or feel pressured and unhappy like I did when I left off. It’s one of the oddities of my Internet life that any time I offer anything for free, it seems to attract people who want to suck the life out of me with demands for more. Demands aren’t good for me. I just want to do my little thing, and be mostly left alone to keep doing it.

Anyway, I fluffed the site up a bit, gave it a new theme, and dumped all the old blog posts, and stale content that has fallen by the wayside. The previous theme was about five years old, and WordPress has evolved so much that I had to slightly tweak each post to get the right stuff to display. I spent the day yesterday doing the same five tweaks to every printables page, and got a good start on the articles.

Maybe there will be a new Go Make Something at some point, or some new content, or something. I’d sort of like to add an art journaling section, now that I’m doing that more regularly. Meanwhile, there’s a ton of older stuff there that’s still pretty handy.

While I was fluffing sites, I also did a little work on this one, to make this section more readable. I love the new blocky theme that displays the visual stuff so well (it’s called a masonry layout in the WordPress world), but I decided it made the blog more difficult to read. So, I had to figure out how to shut off the masonry functions for just this one category of posts. I got it this far, and decided I should live with it for a little while before a tweaked any farther.

That’s my exciting week. Lots of technical stuff, and not too much artwork.