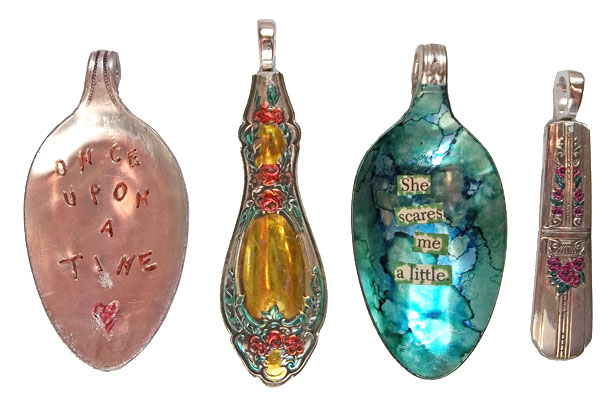 Last Friday’s altered art group meeting was all about altering spoons. I’ve been wanting to play with old silverware ever since I first made altered spoon pendants from stainless steel for the June 2007 issue of The Monthly Muse. I’d read that silver and silver plate respond differently to flattening than steel, and are easier to cut. I discovered that both are true—and also, that silver is easier to break inadvertently, in the totally wrong place *ahem*. Of the four spoons I purchased for our project, I ended up with two bowls and two handles to play with. I’m pretty happy with the handles. I had an embossed lettering failure with the flattened spoon, and in repairing it with my Dremel, ended up with a pendant that looks like it says “ONCE UPON A TINE” instead of “ONCE UPON A TIME”. I suppose that would work if the error was on a fork. On a spoon, it looks sort of goofy. The jury’s still out on the colored spoon. I like the words, but don’t like the way they stand out from the colored background. We’ll see if I do anything about it, or just toss it into the sample box.

The group was much smaller for Friday’s project, which meant we could all sit at the same long setup of four tables, and have one conversation, where we usually populate eight tables, and have three or four discussions going at all times. Since we’re coming to the end of the year, and there were questions on our discussion board about whether we’d be meeting for our usual fourth Friday art journaling session in November (the day after Thanksgiving, and Black Friday) or December (the Friday before the Christmas weekend), I asked a simple question: is everyone happy with how the group is structured, and what we’re doing?

We spent the next hour or so working on spoons and discussing what we were getting from the group, and how it fits into our lives. I learned a lot about the other members, and talked a little about the other art group in which I’d participated, which faced this same question in a less graceful way. Several members expressed their dissatisfaction with the journaling portion of our group, but it was more about their own focus and progress than the way that meeting time has been left unstructured. I listened as several people articulated their plans for that time in the New Year. At the end of the hour, many of us were smiling, and happy that we’d had the talk.

I’m planning on asking the same question at this coming Friday’s journaling meeting.

At one point, our group leader asked if I was looking for us to move in a different direction, or if I had ideas about things I’d rather do—but since the whole point of my being there is just to spend a couple of hours every two weeks around other arty folks, instead of sitting at my computer, obsessing about this week’s new product offerings, answering questions and writing instructions, I’m content to go with the flow rather than try to guide. I’m happy to teach occasionally, but I’m happier to just sit and play. I’d like to do more altered book work, but I don’t want to try to organize a round robin or a regular project, because I just don’t want to be the mom. That’s been a running theme with me through any art gathering in which I’ve participated: I’m happy to pull my weight, pitch in, and participate, but I don’t want to be in charge of anything.

Anyway, what I learned from talking with the other group members: it’s good to ask a question once in a while. It’s good to ask what we’re doing, and why we’re doing it, and if we can make it better. Not that anything has to change—it’s just good to take stock every so often, and remind ourselves what the goals are, and whether we’re doing the right things to meet them. Since the year is winding down, and we’re all about to get sucked into that swirling vortex that is the holiday season, now might be a good time to do that.