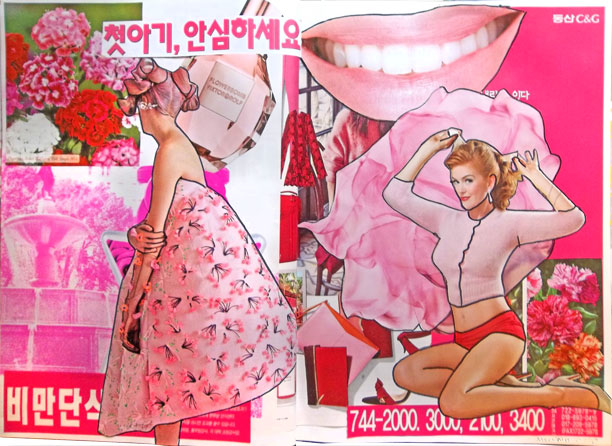 Today’s artwork: pages for a pink challenge on the Facebook Gluebooks group. They’re pink, and they’re done. Score a small victory for personal art time, however brief. Since I’m the one who is posting the challenges in the gluebooks group, I feel like I should occasionally show up to complete one, if only to do my part to keep our little group from falling silent.

Last night, I was having trouble focusing on any of the bazillion projects I have going, so I posted a question about altered books to my Facebook page. This page is mostly me posting things for people to view, but isn’t particularly interactive. People don’t comment much. I find that interesting, because it’s probably the one place online where anyone can actually talk to me. Maybe I just don’t post things that require any discussion. Maybe I’ve discouraged talking to me in so many other places that it carries over to Facebook, which sort of makes me giggle, because that’s usually the one place where you can’t get people to shut up.

Anyway, I asked who does altered books, and who wants to do them, and people answered, and there was a little bit of conversation happening. I asked a second question, about the whole Gelli Plate trend, which sort of mystifies me, because I’ve played with one, and didn’t really care for it—and I seem to be the only person who has not responded positively to it. So, there was more conversation about that. It was nice to have that interaction, and see people talk about things they like.

I tend to be really hesitant about talking to people online. Wait. No. I do a lot of talking online, but it’s more like being at the front of a big lecture hall than in a social group. I post. People view what I post. In the places where I post regularly, and have been hurt by meanies in the past, the ability to converse about what I’ve posted is removed. So, here, and at Go Make Something, and on my YouTube channel, where people have just posted horrible, hurtful things, I’ve shut all that commenting ability off, and removed any way to contact me. Making that difficult has paid off, in that I don’t wake up to a tidal wave of crap when I’ve written something unpopular—and also, that I’m mostly protected from those folks whose mission in life seems to be peeing on everyone’s corn flakes for sport.

The down side of this is that it’s rare to have what I experienced yesterday: a nice little online interaction amongst people who are interested in talking about arty things, without anyone asking for anything, or expecting anything. Connecting with some people, and chatting. I sort of miss that, and I’m looking for more ways to facilitate it, without opening the floodgates and letting all the crazy in.

On another note: one of the people I’ve had the joy of meeting online, and wandering from art group to art group with, is Judah Noah. His longtime partner, Charlie, recently had a stroke, and that’s taken them from being two strong, healthy people generating income and building a home—literally building it with their own two hands, out in the woods—to both being unemployed, and under the weight of ongoing physical therapy and medical bills. Having just experienced a tiny bit of that this year, my heart aches for them, and the extra burden they are carrying right now.

A bunch of arty types have contributed work to Charlie’s Spot, an Etsy store opened to help raise money to help Judah and Charlie with the growing pile of bills. I have some digital collage goodies there, but there’s all sorts of neat stuff—paintings, and jewelry, and supplies, and whatever. You might want to stop in, and do a little early holiday shopping.