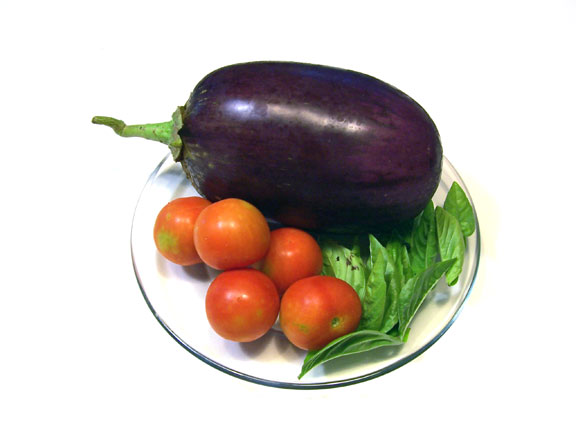 This week was all about vegetables.

Obviously, I’ve been photographing them again. This lovely plate of eggplant, tomatoes and basil is courtesy of my still-producing summer garden. My local garden guru swears we’re on our last few days of summery vegetable goodness, but while it lasts, it’s bliss. I’m getting into the habit of photographing what I harvest before I cut it up and cook it—hence, the photo.

Another new thing: I’m starting to photograph as I cook, and writing recipes. Some of you visited my recipe for pumpkin baked oatmeal last week when I posted the link in my weekly newsletter. It was featured on the Why Veg? Facebook page on Halloween, which was great. I posted a new one this morning, for last night’s dinner selection: vegan pizza.

I don’t talk about being a vegan much. I’ve been one since March. Before that, I was pretty much a vegetarian for a while. That’s what happens when you live alone and your hobbies are vegetable gardening and cooking: you eat a whole lot of vegetables. There’s something really joyful about growing things that you can eat. They taste really good. Well, except the cucumbers. For the life of me, I can’t seem to grow a cucumber that isn’t bitter and horrid…

Anyway, I’m really enjoying the whole vegan thing. It’s a great excuse to try new foods, and to grow them, too. This year, I grew monster eggplants and okra, which I’ve never really eaten much of before. Next spring, I’m adding some mild chilies, peas, and potatoes—and giving up on squash and cukes for a year, until I can face the squash vine border and squash bug problem that is rampant in this part of Texas. It’s no fun to grow zucchini if all they do is keel over and die just as they’re starting to produce. The whole point is that you end up with so many that your neighbors hide in fear that you’ll try to give them another basket full.

So. Vegan cooking. I dig it enough to start writing recipes down. And to join in Vegan MoFo, the vegan month of food blog challenge. Every day for a month, I hope to post a new recipe, or photo of the vegetable garden, or something. Don’t worry—I’m not going to torture you with it here. I post my vegan stuff and my garden stuff over at Lisa’s Garden.

Have I mentioned that every ten years, I do something new? In my 20s, I was a student, and was all about drawing and painting. In my 30s, I was a costume designer, and my medium was fabric. In my 40s, I’ve been a paper artist. Maybe in my 50s, it will be food…