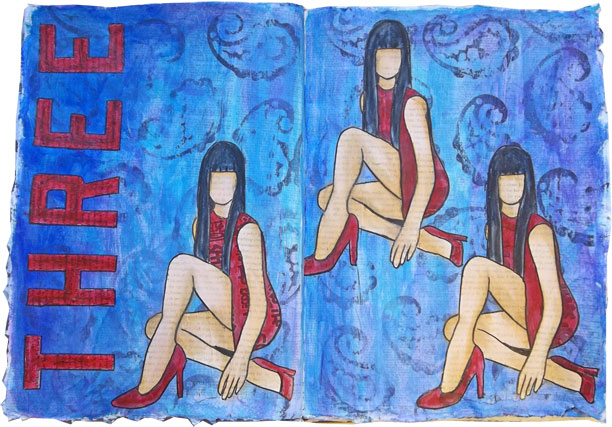 Today’s artwork is from My Big Fat Journal. I’ve been playing with turning figures into a series of shapes that are collaged and painted and assembled again. I think this might turn into an online class at some point, but for now, I’m just playing.

This is the first time in a couple of weeks that I’ve really been able to spend time working on anything that isn’t, well, work. I made myself spend Sunday working on projects I’d started and set aside. I’m about half finished with the canvas board I want to hang in my living room.

Sometime in the last week, I got a new back door for my garage. When I moved in 12 years ago, I inherited a cheap hollow core door with a deadbolt and a steel kick plate along the bottom. The door has been shedding its layers ever since, and every time I opened it to let the dog out, I’d cuss a little. (Yes, I have to let my dog out by going out the kitchen door into the garage, because there is no door that leads from the house to my enormous backyard yet—but that’s a story for another day.) With the news that there are kids living on the street behind me that have kicked in one of my neighbor’s back doors to steal their electronics, and are still roaming around because the police wouldn’t arrest them, regardless of the drag marks from the neighbor’s back door to theirs, I decided it was time to replace my decaying door with something that might discourage the little darlings. Like a big steel door, with a small window at the top that’s too high for them to break to reach the lock, but still lets in enough light that I can go out in the garage without turning the lights on.

Mission accomplished. I now have a new door, which means I’ve replaced every door in the house except the front garage door, which I’ll probably do in January. And then, I’ll start saving for the windows.

Ah, the joys of owning an old house…