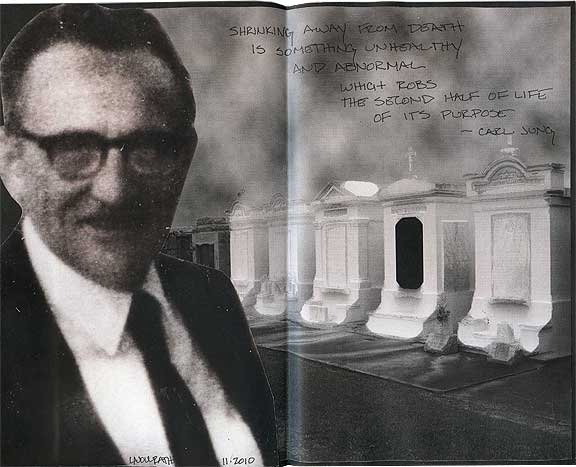 Yesterday would have been my father’s 80th birthday. Unfortunately, he died of lung cancer in 2004.

I miss my dad. He was a good guy. Solid, quiet, and even though he didn’t finish high school, one of the smartest people I’ve ever met. He loved to read, and always had a pile of books and magazines tucked to the side of his easy chair in the family room. He read science fiction, Popular Science and Popular Mechanics. He could build or fix anything. I inherited his innate ability to look at something, and see what it wanted to be.

I didn’t see my father for about five years before he died. I couldn’t go see him while he was sick, although I did manage to sneak in a few phone calls. I didn’t hear he was gone until the day after he passed. That was hard.

I tried to do some artwork about Dad right after he died. I got a red metal tool box, and assembled a bunch of things that reminded me of him: a copy of Popular Mechanics, a bottle of Old Spice, a box of Raisin Bran, a black leather work boot, a coffee can, a pack of unfiltered Camels. That box has been tucked away, waiting for me to do something with it, for six years. I just can’t. Every time I open it, the smell reminds me of him, and I have to close it. Some day.

So, planets sort of aligned yesterday. I had to do one more layout in Su’s book from our dark round robin, and one of the Carl Jung she sent along was about shrinking away from death. I hunted down one of the very few photos I have of my father. It’s a small, grainy photo that was taken of us at my college graduation, and the only reason I have it is because I was carrying it in my wallet when I left home. I combined it with a photo I took in New Orleans, just weeks before Hurricane Katrina, of a row of mausoleums.

It’s not great moments in world art—but it’s the first real art I’ve done about my dad. It’s a start.